To say that shareholders of Intuitive Surgical (NASDAQ:ISRG) have had a good run is an understatement. In just over two years' time, shares have almost doubled while the S&P 500 has returned just 15%. But things weren't always as positive.

Back in 2013, shares of the company fell 37% between February and December. There were two key reasons for the decline: the onset of the Affordable Care Act, and medical publications calling into question the efficacy of the daVinci robot in the case of benign hysterectomies.

I'm not so much worried about the former happening again, but the latter remains an issue that should be on the forefront for Foolish investors in Intuitive.

One of the main reasons I've been a longtime shareholder of Intuitive is because of its optionality. As the company develops new iterations of its daVinci robot, and doctors experiment with the daVinci's usefulness in improving outcomes and costs associated with different procedures, its total addressable market can balloon.

Over time, I've noticed an adoption curve that looks something like this, from the point of view of medical professionals. 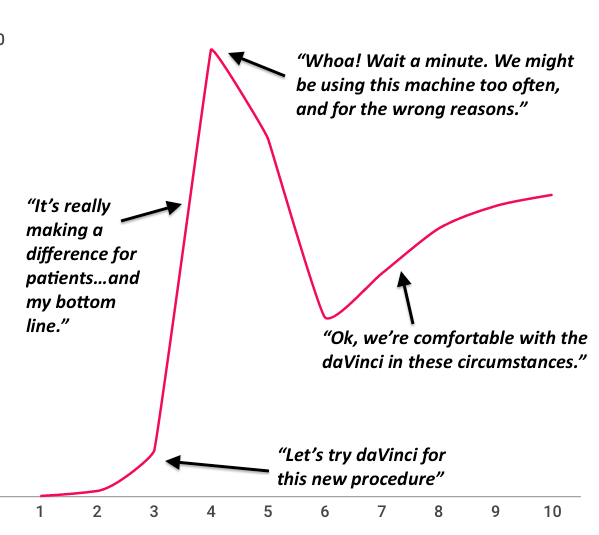 Perhaps the fall off in procedures from the peak to trough is exaggerated a bit, but you get the point. This has happened twice in Intuitive Surgical's history.

The first occurred in early 2012, when the U.S. medical community decided to change the standard operating procedures when it came to prostate-specific antigen (PSA) testing, and opted for non-surgical procedures. Here's what happened to the growth curve for daVinci's use in prostatectomies (dVP).

In the three years leading up to this PSA decision, dVP operations grew by 16% per year. But that growth came to a screeching halt immediately following the change.

The exact same thing happened with hysterectomy procedures (dVH) in 2013. Leaders in the medical community began publishing pieces questioning the efficacy of daVinci for benign hysterectomies. The company, the medical community feared, was convincing far too many doctors and patients to opt for robotic surgery than necessary. The effect was similar.

What had been a five-year track record of 43% growth per year, slowed to less than 1% growth overnight.

Why that applies today

The main reason that Intuitive stock has done so well is because while dVP and dVH procedures stagnated, those in "U.S. General Surgery" (a catch-all for most procedures outside of dVP and dVH) have grown at a remarkable pace since 2011.

While specific numbers have never been made available, management has made no secret of the fact that hernia procedures account for the majority of the growth in U.S. General Surgery. The problem for us investors is the fact that we may have now experienced the full upside of the boom in this category, and I'm left wondering if/when the first shoe will drop questioning the efficacy of the procedure.

I'm not a medical professional, nor am I clairvoyant, so saying that this outcome is bound to occur is absurd. However, I know that while history doesn't repeat itself, it often rhymes.

Slowing growth in hysterectomy procedures would not make me sell my shares of the company. Indeed, in the cases of dVP and dVH, there was still a material demonstration of efficacy for these procedures -- just at slightly less elevated levels than investors had gotten used to.

I highly doubt that daVinci's growth will be limited to hernias in the near future -- already, the company has singled out colorectal procedures as the next area where daVinci can add value. But knowing that a slowdown in hernias is possible in the near future helps prepare me for what's around the corner, and keeps this growth story's narrative in perspective.

At the end of the day, that's just what I -- and hopefully other Foolish shareholders of Intuitive -- need to sleep soundly at night.