Shares of Urban Outfitters, Inc. (NASDAQ:URBN) surged on a strong second-quarter earnings report and an overall upward trend in the apparel retail industry. According to S&P Global Market Intelligence, the stock jumped 20% in August, and as the chart below shows, much of that gain came from the earnings report. 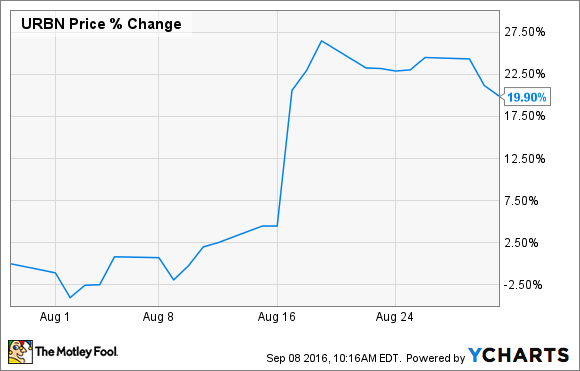 While the apparel retail industry has been struggling, many of Urban Outfitters' peers, including department store chains, reported better-than-expected earnings leading up to Urban's report, giving the stock a boost prior to its own earnings date.

Urban Outfitters' report was far from stellar, underscoring the malaise in the industry as comparable sales grew just 1%, but earnings growth impressed, easily beating Wall Street's expectations. Overall revenue grew 3% in the quarter, but earnings per share were up 27% from $0.52 to $0.66, a result of higher gross margins due to fewer markdowns, decreased inventory, and an aggressive share buyback program that reduced shares outstanding by 9% over the past year.

Urban's results were clearly better than much of the industry, and its panoply of brands including Anthropologie, Free People, and its namesake chain puts it in a better position than stodgy department store chains. However, the company will struggle to deliver more quarters like this one without top-line growth. Credit management for well-timed share repurchases last fall as it spent aggressively when the stock was beaten down, but the company spent more than a year's worth of profits on share buybacks in 2015, meaning that pace is unsustainable. Unsurprisingly, it has slowed significantly this year. Net income increased 15% in the quarter thanks to cost-cutting, but the stock now seems close to fully valued in the absence of faster revenue growth.