Investors looking at Big Oil companies are typically looking for one thing: A steady, income-paying investment in the energy industry. Over the past couple of years, they've been let down, as many companies have seen their share prices decline 16% to 40% ever since oil prices started to drop in earnest back in July of 2014. 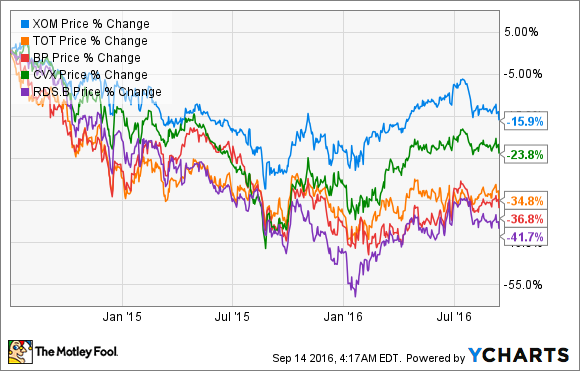 If there's one thing investors should know about the energy industry, it's that it is highly cyclical. The current oversupply will eventually give way to undersupply. With that in mind, it seems now is a good time to invest in Big Oil companies. Today, three that stand out as attractive investments are ExxonMobil (NYSE:XOM), Total SA (NYSE:TTE) and BP plc (NYSE:BP). Here's a quick look at why these three look attractive today.

Still got it after all these years

There is a reason that ExxonMobil has remained solidly at the top of the oil and gas industry for as long as it has: It is probably the best capital allocator in the business. It is constantly looking to cut costs and increase returns on invested capital, and it has the foresight to invest through the cycle that so many seem to overlook.

A great example of this was the news story that for the first time in years ExxonMobil didn't replace all of its production in 2015 with new reserves. Financial pundits and media personalities were quick to give their hot takes that ExxonMobil was losing its edge as a company. Yet so far this year, it has announced the results of a major discovery -- the Liza well off the coast of Guyana -- and an acquisition -- the $2.5 billion purchase of InterOil -- that have combined recoverable resources in the 2.5 billion barrels of oil equivalent. This is more than enough to replace this year's production and cover any shortfalls it had this past year. Even more promising is that the company still has plenty of potential at just these two sites. The area of the exploration block where the Liza well discovery took place is equivalent to the size of Maryland, and the recoverable reserves from InterOil only count two of the company's five exploration sites. These are just a couple of examples of the things that ExxonMobil is working on that should ensure its future success.

With the best balance sheet in the business, a stable record of exploration and development to keep the company chugging along for decades, and its track record of high returns; ExxonMobil still has its fastball. That makes today's shares trading at 2.1 times tangible book value -- near the lowest valuation in over 20 years -- look pretty attractive for long term investors.

Based on the most recent results from Total and the strategic plan that its management team has put out over the past couple years, it appears that Total is set up best to succeed among the Big Oil companies. The company's large spending push to complete several projects was 2015 and 2016, and it has allowed the company to more quickly respond to the drop in oil prices with cuts to capital spending than the others. It also helped that the completion of those projects over the past 18 months or so have mostly been lower cost sources that have not just increased production, but have been decently profitable in today's low cost oil environment.

So while being decently profitable is a big plus, this big wave of project completions does not mean that the company's growth is going to stagnate. Total's management projects that it will increase total oil and gas production by 4% annually between now and 2019, so there is still plenty of room to grow in the next few years, and that doesn't include the major Al-Shaheen contract it won a couple months ago that will add another 100,000 barrels of oil equivalent per day of very low cost production.

Total may not have the reputation that ExxonMobil does, but it does appear to have a very bright future ahead of it. To top it all off, shares look very attractive today with a dividend yield of 5.8% that is a nice cash payment to wait for the oil and gas market to return.

Not the safest bet, but could be a big payoff

I'll admit that BP is by far the most speculative of these three picks. The company is still grappling with its Gulf of Mexico spill and litigation related costs that won't be going away any time soon, and the company has struggled for many years with maintaining a balance between cash generation, capital spending, and dividend payments. If we start looking toward the future, though, there are some signs that things are getting better, and it makes today's share price look semi-attractive.

Every integrated major oil and gas company has an identity to some degree. BP's was that it was deeply rooted in hierarchy and that it was difficult to enact the necessary changes to its cost structure. Recently though, CEO Bob Dudley has done a lot to change that. Today, the company is much more selective about its growth projects and focuses more on higher return production and modest growth rather than lower returns for faster growth. Also, as a means to give the company some more operational flexibility, it has internally spun off its lower 48 US operations -- basically, the part of the business that is pursuing shale -- such that it has the freedom to allocate capital as it sees fit rather than work through the entire BP structure. This could be very helpful for the company as, as we have seen, shale production has a much faster development cycle than deepwater and other traditional oil sources. The ability to more quickly respond to market conditions in this business segment could be helpful in the long term.

Overall, though, the important thing is that these moves are leading to lower operations costs and more prudent capital allocation; something BP has needed for years. Based on these new initiatives, BP's management estimates that it should be able to cover its capital spending and dividend payments with oil in the $50-$55 per barrel range in the coming years. If it can fully execute on this plan, then today's share price and the 7.2% dividend yield that comes with it could be promising.