Shares of Amazon.com (NASDAQ:AMZN) have soared 60% over the past 12 months, but analysts at J.P. Morgan, RBC Capital Markets, and Evercore ISI all believe that the stock could rise another 20% to $1,000 within the next two years. Is that target realistic, or will Amazon be pulled down by fundamental gravity before that happens?

What Amazon's valuations tell us

Amazon currently trades at 208 times earnings. That sounds lofty, but it's actually lower than its projected earnings growth rate of 366% this year. The stock's P/E has also been declining rapidly compared with previous years, thanks to the growing profitability of its Amazon Web Services (AWS) segment. 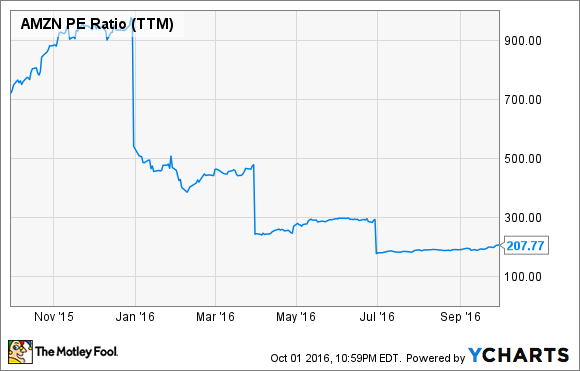 If Amazon hits the average earnings estimate of $5.82 per share this fiscal year, a stock price of $1,000 would imply a trailing P/E of 172 -- which looks reasonable compared with Amazon's historical P/E ratios.

Amazon currently trades at 80 times forward earnings, which matches the 80% earnings growth analysts expect next year. If Amazon matches the average earnings estimate of $10.50 per share for next year, a stock price of $1,000 would equal a trailing P/E of 95 -- its lowest multiple since late 2011. By these measures, a $1,000 price target could be considered conservative based on Amazon's historical multiples. 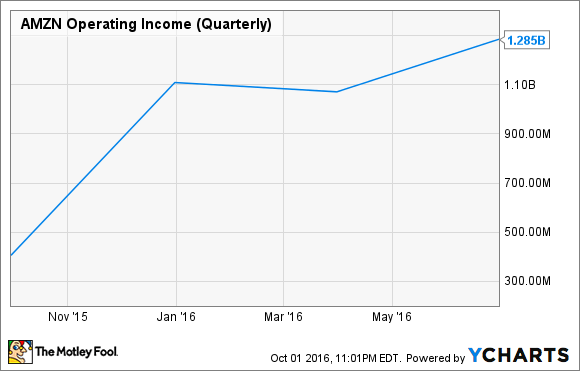 AWS is the world's largest cloud computing platform, with an annual run rate of $11.5 billion as of last quarter, and it doesn't show any signs of slowing down. It launched its sixth AWS region in the Asia Pacific region in Mumbai last quarter, bringing its total coverage area to 35 availability zones across 13 technology infrastructure regions, and it plans to add nine new availability zones across four regions next year.

This prisoner-taking strategy works wonders. Back in July, research firm CIRP claimed that Amazon had 63 million Prime members in the U.S., an increase of 19 million from last June. It also estimated that Prime shoppers spent an average of $1,200 last year, versus $500 for non-members. While Prime margins will remain thin, its growth will help Amazon gain market share and further marginalize its rivals with economies of scale. That's why analysts expect Amazon's sales to climb 28% this year and another 22% next year.

But mind the headwinds ...

Amazon is formidable, but it isn't invincible. Apple, one of Amazon's major AWS customers, recently moved some of its services to Alphabet's Google Cloud to reduce its dependence on AWS. Spotify also moved its infrastructure to Google Cloud instead of AWS or Microsoft's Azure.

These moves indicate that AWS's dominance of the cloud platform market isn't absolute, and that competition from Google, Microsoft, and others could still spark fresh pricing wars and reduce the segment's profitability. On the e-commerce front, a resurgent Wal-Mart could hurt Amazon with aggressive price matching, curbside pickups, and subscription-based delivery services.

I believe that Amazon could easily rise above $1,000 in the near future since that price is heavily supported by its earnings growth and historical valuations. However, I think investors should still pay close attention to the challenges that its AWS and marketplace businesses could face.