Great Panther Silver Ltd (NYSEMKT:GPL) is a precious metals miner with a heavy bias, as its name suggests, toward...panthers! No, seriously, silver. The stock is up nearly 170% so far this year. Clearly silver's solid advance is part of that, but it's only one piece of a bigger story. Here's Great Panther Ltd's stock explained in four charts.

The first thing you'll want to understand about Great Panther's stock is that it really has done quite well. On an absolute basis, running up almost 170% is impressive. But here's the thing -- Great Panther is up more than larger and better known precious metals miners, like Barrick Gold (NYSE:GOLD) and Newmont Mining (NYSE:NEM), which have advanced nearly 145% and 120%, respectively, so far this year. 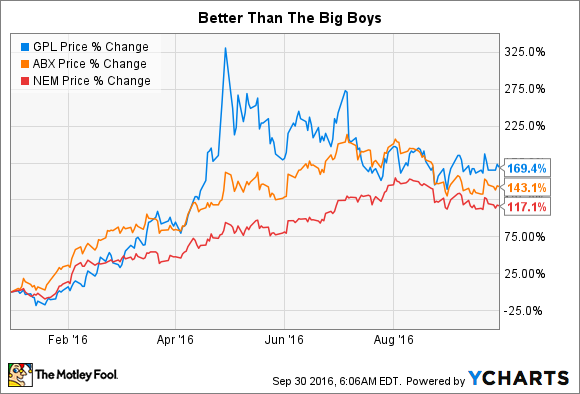 So there's something going on at Great Panther Silver more than just a precious metals rally. And that's the big story that you'll want to pay attention to.

Before getting to the real meat, you have to stop for a second and look at the foundation of Great Panther Silver's house. It's a surprisingly solid one. Although the company is tiny, with a market cap of just $230 million or so, it has no debt on its balance sheet. Newmont and Barrick, industry Goliaths with market caps of more than $20 billion each, can't claim that. Newmont's debt makes up around a third of its capital structure, with Barrick's debt at a more notable 50% of its capital structure.

On top of that, at the midpoint of the year, Great Panther Silver had nearly $22 million in cash on hand (assuming you convert from Canadian to U.S. dollars) and a current ratio of 9.8, and a recent equity issuance will add even more firepower. That's a pretty good financial position to be in for a miner as the precious metals market is starting to heat up. 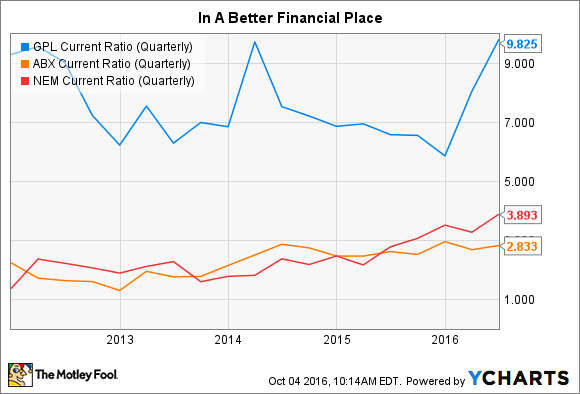 And take a quick look at the difference between Great Panther's current ratio, a measure of current assets relative to near term obligations, compared to its giant peers. Great Panther has a lot more financial leeway. Basically, Great Panther can keep spending on its business without having to worry about debt payments or due dates, while benefiting from rising silver prices all along the way.

So Great Panther is well positioned financially for the silver price advance. But there's something else going on, too. When silver was lower, the miner wasn't making money. Its costs for pulling silver out of the ground, called all-in sustaining costs (AISC), were higher than what it was getting paid for the silver it produced. Basically, it was a marginal miner -- it needed higher precious metals prices to make money. 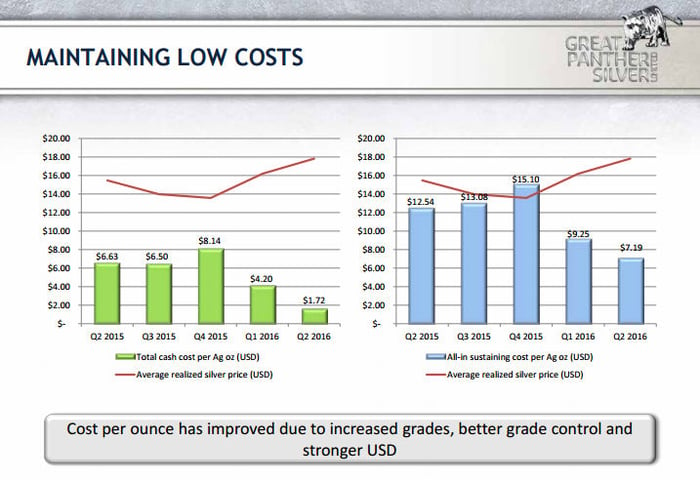 However, the company has been cutting costs and shifting its development budget. That's helped to reduce its all-in sustaining costs, as the chart above shows. Rising gold prices (the miner sells gold to offset its operating costs in silver) and currency fluctuations were a part of the improvement, but so, too, were operational changes. So Great Panther Silver is in a much better position today than it was just a few years ago.

Now, the low costs of the second quarter aren't going to stick around for long. So you'll want to keep an eye on this metric. For the year, the company is expecting all-in sustaining costs of around $8 an ounce, which suggests a notable uptick the rest of the year. But that is still well below current realized prices for silver. In other words, costs may go up from here, but as long as silver prices don't crater, Great Panther should remain on the right side of this equation.

The next notable graph reflects production. Putting it simply, the company produces a lot more silver today than it did just a few years ago. In fact, Great Panther Silver expects to produce nearly twice as much silver this year as it did in 2011. 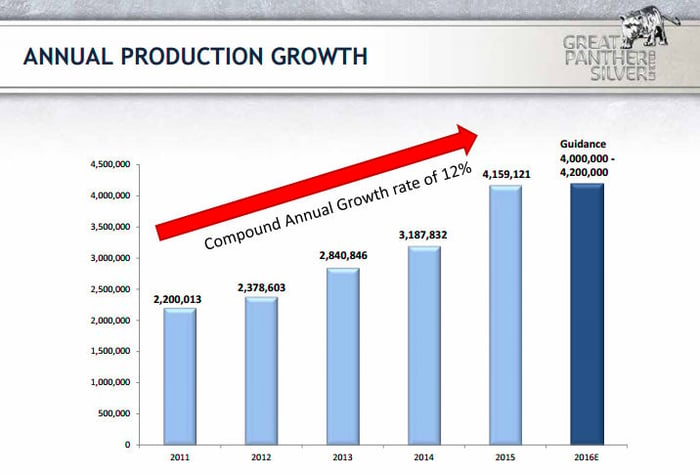 Essentially, despite the precious metals downturn, Great Panther was able to build its business so that it was leveraged to the silver advance that's taking place today. Now, to be fair, production this year is expected to be flat with last year's figure. However, it still has expansion opportunities at its mine projects that it can exploit, so there could be more production growth ahead. And with no debt and ample cash on the balance sheet, there's little stopping the miner from making that happen.

So Great Panther Silver's shares have advanced more than some of the bigger names in the space. A big piece of that can be attributed to its solid financial position, declining costs, and rising production, in addition to the precious metals rally. And to the fact that the miner is getting much closer to turning a profit....

Between 2014 and 2015, the miner reduced its loss by over 70%. So far this year, assuming that silver prices remain strong, it looks like Great Panther will again pare its loss. If precious metals prices keep moving higher, it might even break a profit, though it's more likely that such a positive turn of events won't happen until next year.

The point, however, is that Great Panther Silver is using a solid foundation to slowly build itself into a more meaningful miner. And as you would expect, as it's doing that, it's becoming a more desirable investment. Of course, if silver prices tumble, Great Panther's earnings prospects would dim materially, so only investors with a positive outlook for precious metals should be playing with this big cat.