Income investors are often drawn to high-yielding stocks like moths to a flame, but many of these investments are actually "dividend traps" with unsustainable dividends. Investors can easily spot these traps by their payout ratios -- the percentage of a company's earnings which it spends on dividends. 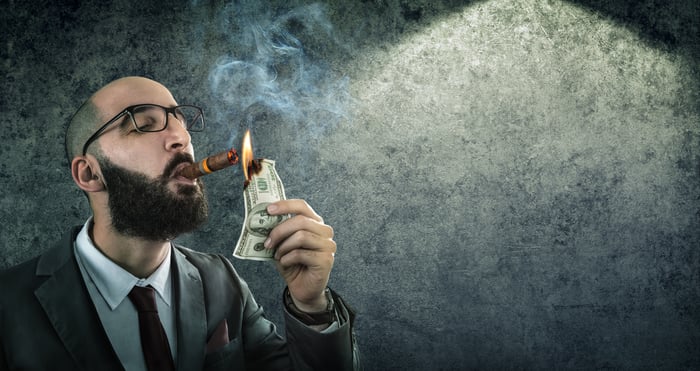 If that ratio exceeds 100% for several quarters as profits decline, the payout could be slashed. Let's examine three companies that fit that description -- Western Digital (NASDAQ:WDC), Frontier Communications (OTC:FTR), and Guess (NYSE:GES).

I previously discussed why hard drive maker Seagate, with its trailing 12-month payout ratio of nearly 300%, needs to cut its dividend. However, its main rival Western Digital isn't faring much better, with a payout ratio of 192% propping up its forward yield of 3.5%.

Western Digital's bottom line is being weighed down by two main factors. First, sales of hard disk drives (HDDs) have been falling due to sluggish PC sales and the rise of solid state drives (SSDs), which offer less storage per dollar but are smaller, faster, more power efficient, and less prone to physical damage. Second, Western Digital's $19 billion acquisition of SanDisk, which helped it gain market share in SSDs and flash memory, caused its free cash flow (FCF) levels to plunge -- resulting in the suspension of its buyback program.

Analysts expect Western Digital's earnings to fall 10% this year before possibly rebounding 40% in fiscal 2018 after it "digests" SanDisk. But until that happens, it probably won't hike its dividend, which has remained at $0.50 per share for seven consecutive quarters. If the industry headwinds worsen, WD could slash or suspend its dividend.

There are plenty of safe dividend plays in the telecom sector, but Frontier Communications' forward yield of 9.9% isn't one of them. The telco paid out a whopping 218% of its earnings as dividends over the past 12 months. By comparison, AT&T and Verizon respectively have payout ratios of 79% and 61%.

Frontier provides telecom services to rural areas and smaller cities across the U.S. It expanded dramatically over the past year by acquiring various wireline assets from Verizon. Verizon was eager to divest those slower-growth assets to invest in its higher-growth wireless business, giving Frontier a chance to scale up.

However, that move also boosted its long-term debt to nearly $18 billion last quarter, while reducing its adjusted free cash flow to just $250 million. Meanwhile, analysts expect Frontier's annual earnings to slide from a profit of $0.13 in 2015 to a loss of $0.08 in 2016 and a loss of $0.09 in 2017. Those plunging growth figures indicate that Frontier's dividend, which has been stuck at $0.11 for seven straight quarters, could be cut in the near future.

Guess, like many apparel retailers, has been pummeled over the past few years by "cheap chic" players like H&M and Forever 21. Analysts expect its revenue to rise 3% this year, but earnings are expected to plunge 32% on weaker margins. Those warning signs indicate that its forward yield of 6.3% -- which is propped up on a payout ratio of 114% -- is unsustainable.

By comparison, Gap has a payout ratio of 52%, and American Eagle Outfitters has a payout ratio of 39%. But earlier this year, CEO Victor Herrero declared that Guess could still generate "sufficient cash flow" to finance its dividend over the next three years. Herrero also stated that he had personally reinvested 100% of his dividends into the company, and planned to do so "for the foreseeable future."

However, Guess generated less than $2 million in free cash flow over the past 12 months while paying out $76.7 million in dividends. Its quarterly payout has also been stuck at $0.23 for 11 consecutive quarters. Those red flags indicate that a big dividend cut could be in the cards.