Copa Holdings (NYSE:CPA) outpaced other airline stocks again in September, rising 15%, according to data from S&P Global Market Intelligence. By the end of the month, Copa stock had doubled since bottoming out in January. 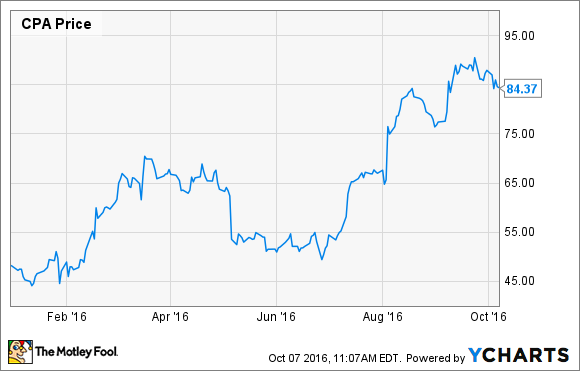 Copa Airlines, based in Panama, has been hit hard by economic weakness in Latin America lately. In Q2, operating income plunged more than 30% year over year due to a 7.7% decline in revenue per available seat mile.

However, there are signs that revenue performance is starting to improve. In early September, Copa reported that its load factor (the percentage of seats filled with paying customers) had jumped 7.3 percentage points year over year in August. That suggests demand is improving, although Copa is also likely stimulating traffic with lower fares.

Copa stock also received a handful of analyst upgrades during September. Most Wall Street analysts seem to be increasingly optimistic that Copa will return to unit revenue growth in 2017, helped by rising ancillary revenue streams.

Indeed, at an investor day late last month, Copa's management identified a variety of margin expansion opportunities. All told, these tailwinds could boost Copa's operating margin to 19% by 2019, up from an estimated 11%-13% this year.

Copa appears well positioned to return to strong profit growth in the next few years. However, a lot of that improvement now appears to be baked into Copa's stock price. Copa shares currently trade for 18 times the company's projected 2016 earnings. That's a significantly higher earnings multiple than is typical for airline stocks.

Additionally, while Copa has touted lower fuel hedging losses as a major earnings tailwind for 2017, that could be wiped out by higher market prices for jet fuel, if oil prices continue to rise. Continued economic weakness in Latin America could also weigh on profit growth. As a result, it seems probable that the biggest gains for Copa shareholders have already occurred.