On Monday, Tesla Motors (NASDAQ:TSLA) sent out invitations to the press for an event on Friday. The Oct. 28 product announcement, which will take place at Universal Studios in Los Angeles at 7:00 p.m. PDT, puts an official date and time to Tesla's previously publicized plans to unveil a "solar roof" with an "integrated Powerwall 2.0 battery and Tesla charger."

Based on the sun and roofs in the art on the header of the invitation, Tesla's "solar roof" is obviously still on the agenda for Friday's product announcement. 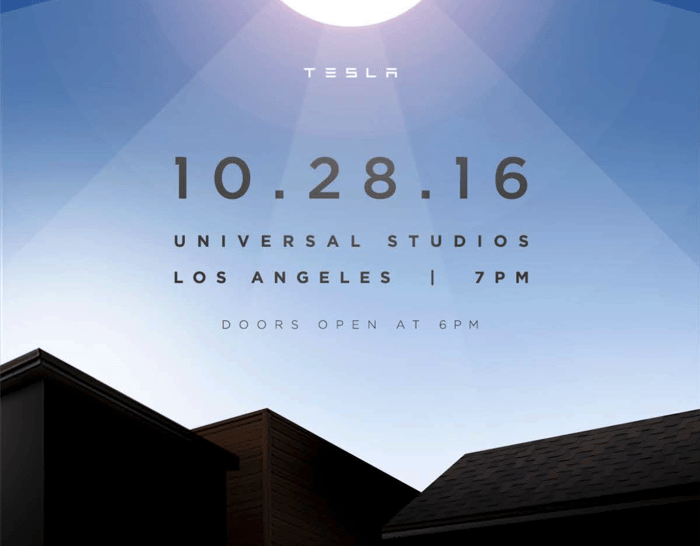 Ahead of Friday's event, here's what investors should expect.

New products may be contingent on a successful merger

Investors should keep in mind that whatever Tesla shows on Friday is likely contingent on a successful acquisition of solar panel company SolarCity (NASDAQ:SCTY.DL).

While investors first heard of Tesla's intent to acquire SolarCity earlier this summer, the deal has not closed yet. Subsequently, Tesla implied in an Oct. 12 blog post that the integrated solar roof unveiled on Friday would require the two companies to combine in order for Tesla to actually bring it to market.

"On October 28th, Tesla and SolarCity will unveil a solar roof product, which along with Powerwall 2.0, will show the kinds of products that the combined company will be able to create," Tesla explained.

Shareholders of both SolarCity and Tesla will vote on the merger on Nov. 17. Friday's announcement, therefore, comes at a critical time as Tesla attempts to convince shareholders of the deal's merit.

The solar roof will be Tesla-branded

When Tesla first announced the company's offer to acquire SolarCity, CEO Elon Musk confirmed the combined company's solar products would ditch SolarCity branding and take on the Tesla brand -- a move that makes sense considering Tesla plans to market the roof alongside its vehicles and energy storage products both on its website and in its stores.

However, despite the fact that Tesla has confirmed the combined company would adopt Tesla's brand, it isn't clear just whether SolarCity will get some time in the spotlight since it is taking place before the Tesla-SolarCity acquisition actually closes. But based on the fact SolarCity isn't mentioned a single time in the event invitation, it's unlikely any new product shown during the event will sport the SolarCity brand.

It's not a module on a roof, but rather the roof itself

Little is known about Tesla's "solar roof" product ahead of Friday's unveiling. But Musk did tease tidbits about the product during SolarCity's second-quarter earnings call in August.

Furthermore, Musk emphasized the new product is "a fundamental part of achieving a differentiated product strategy."

Tesla's Friday event will fittingly take place outside, suggesting the company will show off what the solar roof product will look like when it is installed. Anyone will be able to tune into the event on the company's live webcast of the presentation on Tesla's website.