Last month, shares of clinical-stage DNA-based therapy developer Inovio Pharmaceuticals, Inc. (NASDAQ:INO) fell 30.6%, according to data from S&P Global Market Intelligence. A clinical hold for a late-stage trial means investors will have to watch the company burn through more cash before it has a product to sell. 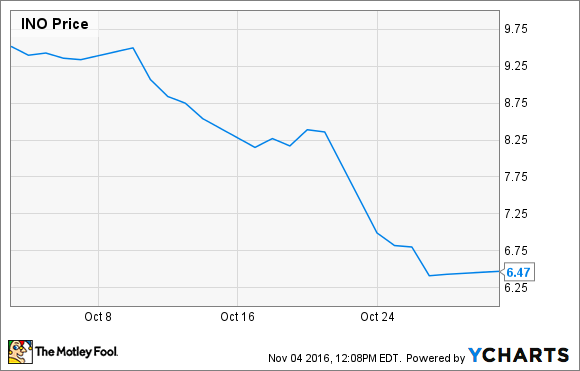 Inovio has over a dozen candidates in clinical-stage development, but its lead candidate, VGX-3100, is the only one ready to begin a phase 3 study designed to support an application. The vaccine is aimed at human papillomavirus (HPV), an incredibly common sexually transmitted disease that infects about 14 million people each year.

Although HPV vaccination is already available, VGX-3100 is the first experimental vaccine to show a significant reduction in abnormal cell growths associated with cervical cancer. Cervical cancer accounts for a large portion of about 38,800 HPV-associated cancers that occur in the U.S. each year, which makes peak sales estimates of about $500 million for the vaccine seem quite reasonable. With Inovio's market cap hovering around $475 million at recent prices, hitting that estimate would probably lead to market-thumping gains.

On one hand, the stock's decline seems like an overreaction. Although FDA communications aren't subject to full disclosure, Inovio said the hold placed on the phase 3 trial is a result of concerns about the vaccine's delivery device, not the vaccine itself. The company expects it can resolve the matter soon enough to begin the trial in the first half of next year.

On the other hand, Inovio investors have plenty to worry about. In the 167-patient phase 2 study, abnormal growths responded in 49.5% of patients given the vaccine, versus 30.6% of those receiving a placebo. The benefit was strong enough to be considered statistically significant, but not by an encouraging margin.

Equally troubling is the likelihood of further share dilutions before we know if VGX-3100 has a real shot at an approval. Inovio announced its phase 2 victory more than two years ago but hadn't even begun enrolling patients for the phase 3 trial when the FDA placed the hold.

Since announcing positive phase 2 results for VGX-3100, the company has raised a great deal of equity, increasing its outstanding share count by about 21.77%. At the end of June, it had cash, cash equivalents, and short-term investments of about $134.5 million. It burned through a relatively modest $18.2 million in the second quarter, but pivotal vaccine trials typically require thousands of patients at no small expense. If it ever gets around to starting one, investors can expect a lot more dilution.

In fact, Inovio has diluted its shares more than any other company I can think of. Over the past 16 years, Inovio's share count has grown roughly 5,160%, but it doesn't have a product to sell yet. This is why it's on my list of biotech stocks to avoid. While the stock might seem attractive following its recent dip, it's probably best to keep this biotech in a watchlist until it shows clear signs it's finally headed for the commercial stage.