In late October, Apple (NASDAQ:AAPL) unveiled its next-generation MacBook Pro laptops. One interesting feature of these systems is that the company replaced the legacy USB ports with Thunderbolt 3 ports (two on the entry-level 13-inch MacBook Pro; four on the higher-end 13-inch model with Touch Bar as well as on the 15-inch model).

During Intel's 2015 investor meeting, former Intel PC chief Kirk Skaugen said that the company plans to integrate Thunderbolt into its processors over the "next several years."

Let's take a closer look at when we should expect it and what it will mean for Intel and PC makers such as Apple.

The implications for Intel

Skaugen's comment about Thunderbolt integration came as part of a broader discussion on the reasons that Intel generally integrates functionality previously handled in stand-alone chips into its processors.

"We have a history of intelligent integration," Skaugen began. "If you look at audio, Iris graphics, touch controllers, image processing units, sensor hubs, and security, all of these when we integrate we add a little bit to our average selling price, we give a little back to our OEM, and we give a little bit back to the end user."

This commentary suggests that when Thunderbolt capability is integrated directly into Intel's future processors, Intel will be able to charge customers more for those processors -- a clear win for Intel.

Intel's specification page shows list prices for its Thunderbolt controllers ranging from $6.45 to $8.55. If Thunderbolt integration allows Intel to raise its Core processor average selling prices by just $2 to $3, then Intel could be looking at hundreds of millions of incremental annual revenues.

The implications for personal computer makers

The impact to a company like Apple, which has already gone all-in on Thunderbolt/USB Type C, will likely just be that their systems become a little bit cheaper to build. The savings won't be huge, but most for-profit entities tend to like opportunities to shave off unnecessary costs.

The other system vendors that haven't yet adopted the technology may be compelled to do so once it comes standard with every Intel processor.

Thunderbolt is a marketable technology that offers a significant performance boost over prior-generation USB technology; if some system vendors adopt it, the system vendors that don't could be putting themselves at senseless disadvantages in the marketplace. 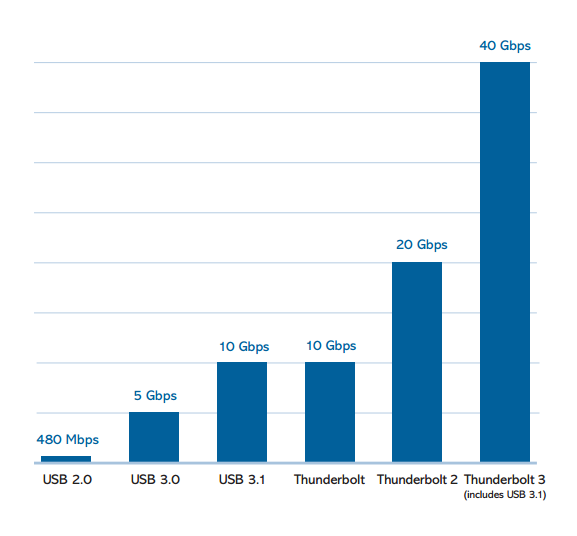 Thunderbolt 3 is apparently much faster than prior technologies. Image source: Intel.

Furthermore, if the technology will be integrated into future Intel processors anyway, and if the system vendors are going to pay for those processors whether or not they use Thunderbolt, then why not just implement it?

With a proliferation of systems with Thunderbolt support, it is likely that computer peripheral makers will more aggressively design their products to provide native support for and take full advantage of the standard.