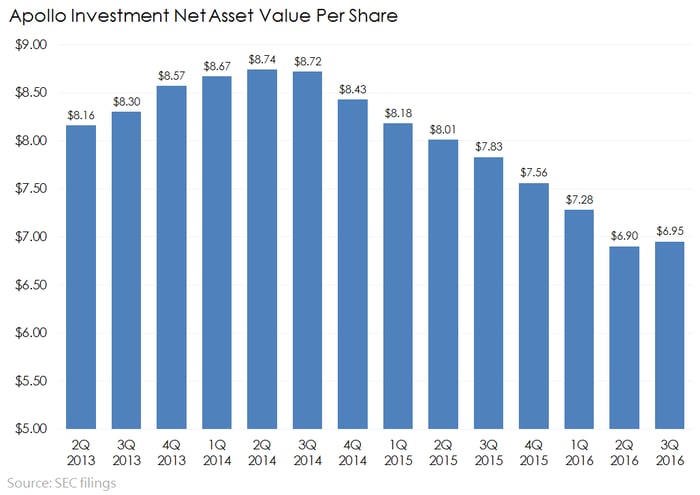 For the first time in two years, Apollo Investment Corporation (NASDAQ:AINV) reported a sequential increase in book value per share. Book value increased on a per-share basis due to earnings in excess of its dividend, share repurchases, and stability in the value of its investment portfolio.

Capital gains and losses are inherently volatile from quarter to quarter and from year to year. Apollo's losses have largely exceeded its gains as it suffered from repeated markdowns on the value of its investments, primarily those in the oil and gas industry. But this quarter, Apollo reported that gains exceeded losses, albeit marginally, which is a positive development in light of its investment losses in recent history.

Apollo Investment is a good position to make new investments on an opportunistic basis, while funding continued share repurchases at a discount to book value.

The company reported that its net leverage ratio fell to 0.63 times equity this quarter, significantly lower than net leverage of 0.73 times in the year-ago period. Apollo Investment is required by law to keep its borrowings at less than one times its equity, and has historically targeted a leverage ratio of around 0.75 times.

As for what Apollo Investment is shopping now, management noted only that it would carefully weigh new investments with the ability to repurchase shares at a discount. Despite the potential bargains energy sector -- an industry that hasn't been good to the company in the last two years -- management indicated that it has a preference for companies with less commodity price exposure.