Most investors are on the hunt for stocks that promise fast sales and earnings growth in the years ahead. That makes sense, as companies that can do so for extended periods of time stand a good chance of producing market-beating returns.

With that in mind, I ran a simple screen on Finviz that looked for companies that exhibit two simple criteria.

From there, I simply picked out the three companies with the highest projected EPS growth rate over the coming five years. This methodology produced three stocks -- Incyte Corporation (NASDAQ:INCY), Covanta Holding (NYSE:CVA), and Netflix (NASDAQ:NFLX) -- that all promise greater than 50% EPS growth over the long term. Let's take a closer look at each to see if any are worth buying.

Incyte Corporation is certainly a thriving biotech. The company's crown jewel is a JAK1 and JAK2 inhibitor called Jakafi. This drug treats the bone marrow diseases myelofibrosis and polycythemia vera, both of which are rare. That fact allows Incyte to charge six figures for an annual treatment, which should allow the company's top line to eclipse $1 billion this year.

Beyond Jakafi, Incyte also has a pipeline that is packed with potential. One intriguing product candidate is called epacadostat, which is in late-stage trials as a hopeful treatment for melanoma. If all goes well, it could turn into another home-run drug. Market watchers believe annual sales could eventually eclipse $3 billion if approved.

Inycte also could also greatly benefit from the approval of another JAK inhibitor called baricitinib. This drug has already been licensed to Eli Lilly and it is currently pending FDA approval as a treatment for rheumatoid arthritis. Incyte could pull in another $1 billion annually from this drug if it gets the thumbs up.

When added together, market watchers are expecting Inctye will be able to grow its profits by more than 58% annually over the next five years.

Covanta Holding owns or operates a few dozen waste-to-energy plants in North America. The company's business model is to collect nonhazardous solid waste and then turn it into electricity, which it then sells back to the grid.

While this company isn't exactly sexy, its business model certainly is intriguing. After all, customers actually pay the company to collect its raw material. How many other businesses can you name that do the same?

While Covanta's profits have been kept in check over the last few years, there are reasons to believe they're about to take off. For one, Covanta has been building a new facility in Ireland that's projected to come online in late 2017. In addition, the company's 20-year contract with New York City recently kicked in. If that goes well, it could spur adoption in other U.S. cities in the future.

Add these two developments together, and analysts are projecting that the company's EPS will grow by 54% annually over the next five years. Who knew waste disposal could be so innovative?

The final stock on today's list is Netflix, one of the largest video streaming providers in the world.

What's intriguing about Netflix is that this was once a highly profitable business. Once upon a time, Netflix's DVD-by-mail business was cranking out cash flow, but a few years back, management made the bold decision to focus instead on providing streaming and original content. That switch required massive investment, which caused the company's profits and share price to plunge. 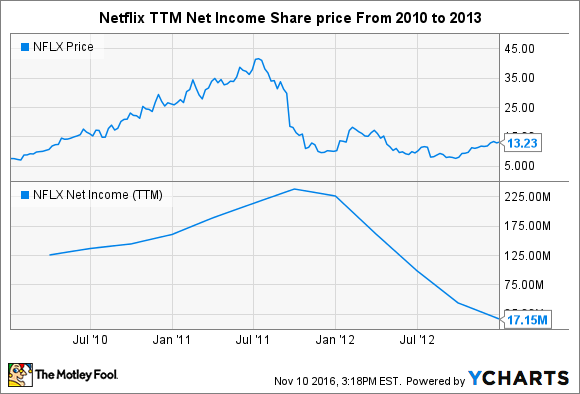 Investors have since come to embrace the bold decision, and we've seen hit shows like Stranger Things, Narcos, House of Cards, and Orange is the New Black cause membership to skyrocket.

Management believes it will finally have enough scale to drive "material global profits" from 2017 onwards, which sets the company's bottom line up nicely to explode. Market watchers are projecting that EPS will grow by more than 73% annually over the next five years, which makes it the fastest grower on this list.

While you could argue that all three of these companies are deserving of a place in your portfolio, I'm personally the most bullish on Netflix. I've been a longtime investor and customer, and I think the company still has plenty of room left for revenue and profit growth in the years ahead. That's especially true when you consider that the company has only just started to localize its content for international markets. As it starts to crack that nut, international revenue growth should really start to soar. That's why I plan on counting myself as a shareholder for a long time to come.