At this year's Supercomputing conference, Intel (NASDAQ:INTC) made a few disclosures pertaining to future processors targeted at high-performance computing applications.

Among said disclosures was the announcement that the company's next-generation Xeon server processor, based on the Skylake architecture, would achieve "general availability" in the middle of 2017.

Mid-2017 is in line with previous leaks

Earlier leaks suggested that Intel was targeting a launch of these processors during the first half of 2017, so the chipmaker is on track to meet that schedule. Additionally, in an interview with The Next Platform, Intel's Charles Wuischpard said that "this doesn't mean we will not be shipping quite a few in volume before then," implying that select customers will get early access to the processors, probably through Intel's Early Ship program.

The Broadwell-EP to Skylake-EP transition ideally should have been a little quicker, but a year and a quarter isn't going to be a problem.

Skylake Xeon should be quite nice

The new Skylake-based Xeon processors should serve as quite nice improvements over the current Broadwell-based processors.

Additionally, the Skylake architecture is a new architecture that delivers a solid performance boost over the prior-generation Broadwell architecture, core-for-core, clock-for-clock.

The Skylake-EP processors, according to various leaks, are also expected to pack more cores than their Broadwell-EP predecessors, which should help to further boost performance and, potentially, what Intel can charge for its chips. 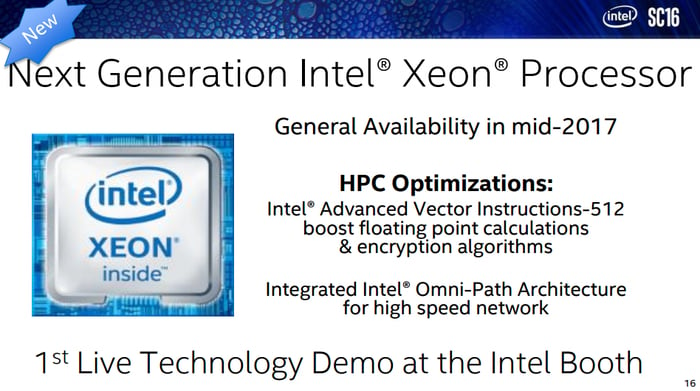 And, finally, the Purley platform that these new chips will require to work is expected to bring several new features relative to the older Grantley platform, including expanded USB and network connectivity.

At the end of the day, Intel's job with respect to new server processor launches is to achieve three basic things:

I believe that the performance and feature improvements that the new Skylake chips and the associated platform bring to the table should be quite compelling and effective in achieving the three major goals outlined here.