Shares of Dollar General (NYSE:DG) surged last month, gaining 12%, according to data from S&P Global Market Intelligence. The stock rose alongside the market during the post-election rally. As you can see from the chart below, much of the gains came in the days following President-elect Donald Trump's victory. 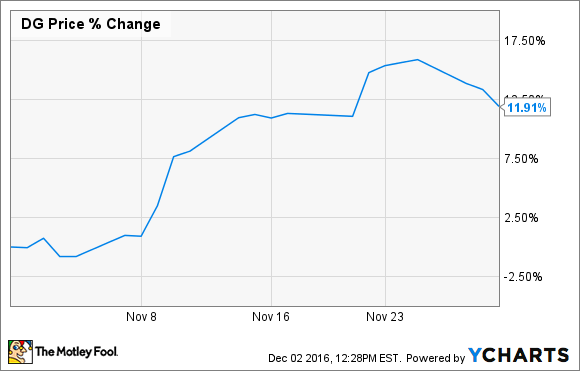 It was surprising to see the dollar-store chain as a big winner after the election as peers like Wal-Mart and Dollar Tree did not reap the same gains. Still, retail stocks in general rose as investors hoped a Trump administration would spur consumer spending and implement business-friendly policies like keeping the minimum wage low and reducing requirements for healthcare spending.

After the month ended, Dollar General shares slipped 5% as it reported third-quarter earnings on Dec. 1. Comparable sales were down 0.1%, and earnings per share fell from $0.86 to $0.84, though the company said it would have been $0.89 excluding store relocation costs and disaster-related expenses. Sales and profits missed expectations, however, and the company said full-year EPS growth would come in at the low end of its 10%-15% long-term range.

As for the company's prospects under a Trump administration, those seem more uncertain. For a retailer that depends on a low-income customer base, threats to wages and benefits, like food stamps, could hurt the company. And a resurgent Wal-Mart and the growing popularity of e-commerce also threaten Dollar General, which has more than 13,000 stores nationwide and is investing in more stores with 1,000 more expected next year.

Despite the gains in November, with the retail landscape shifting I'd expect more disappointing reports like the one the company posted on Thursday.