While Anadarko Petroleum (NYSE:APC) stumbled as it entered November due to poorly received third-quarter results, that disappointment did not keep its stock down for long. A positive analyst note, an asset sale, and OPEC's decision to cut production all combined to fuel a double-digit rally last month. 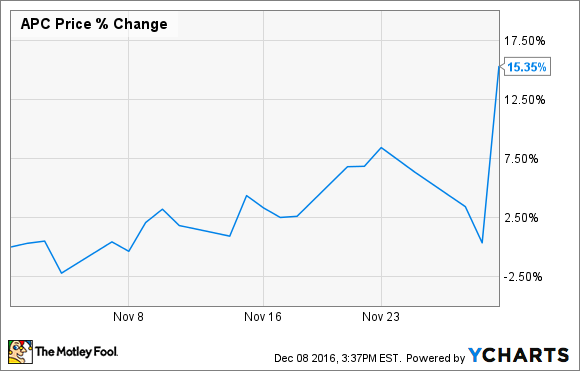 Investors were not all that enthused with Anadarko's third-quarter report, which it released on Halloween after the market closed. That is because the company recorded an adjusted loss of $431 million, or $0.89 per share, which was $0.32 per share worse than analysts had expected. That wider loss came despite the fact that oil production exceeded the midpoint of the company's guidance by 13,000 barrels per day and costs declined more than anticipated.

The good news for investors is that it has repositioned so it can deliver 10% to 12% compound annual oil production growth over the next five years if oil is in the range of $50 to $60 per barrel. That outlook caused analysts at Credit Suisse to change their tune and upgrade the stock from neutral to outperform while increasing their price target from $70 to $77. That upgrade put it in an elite group with just four other oil stocks that they currently rate as outperform, including Concho Resources (NYSE:CXO). These analysts like both Anadarko and Concho Resources because of their prolific Delaware Basin positions. Also, they saw more asset sales in Anadarko's future, which is a catalyst because it would reduce the company's absolute debt level.

That is just what happened later in the month when the company agreed to sell its East Texas position for $1 billion. The assets included its Haynesville shale gas properties as well as some associated midstream assets. These were non-core to the company given its renewed focus on oil growth assets such as those in the Delaware Basin.

Its focus on ramping up oil output appears to be coming at the perfect time now that OPEC has decided to step in to support oil prices. That announcement sent oil stocks soaring at the end of November because it likely means higher oil prices are in the forecast. Because of that, Anadarko Petroleum could deliver high-end growth in the future of 12% annually, which it can do if crude rises to $60 a barrel. Meanwhile, Concho Resources might trounce its forecast of 20% compound annual crude production growth over the next three years should oil run above its forecast.

Like most other oil companies, Anadarko has had to readjust so that it can thrive at lower oil prices. It has finally gotten into the position where it can do that starting next year, thanks to several recent strategic moves to improve its financial flexibility and asset base. Now, with OPEC back to supporting prices, the company could grow even quicker than anticipated.