For a while now, rumors have swirled that semiconductor stalwart Broadcom (NASDAQ:AVGO) had pulled the plug on a processor project known as Vulcan. Two independent reports -- one from EETimes and one from The Register -- confirmed that this was indeed the case.

Vulcan was expected to be an ARM-architecture successor to the Broadcom-designed MIPS architecture-based processor cores that underpinned its XLP line of multi-core communications processors. The XLP processor line and associated engineering team came to Broadcom from its $3.7 billion acquisition of a company called NetLogic Microsystems in 2012.

In a 2014 investor presentation, Broadcom called Vulcan a "server class core" and boasted that it would have 90% of the per-thread performance of Intel's (NASDAQ:INTC) Haswell processor family and would "exceed competitive server platforms on a socket level." 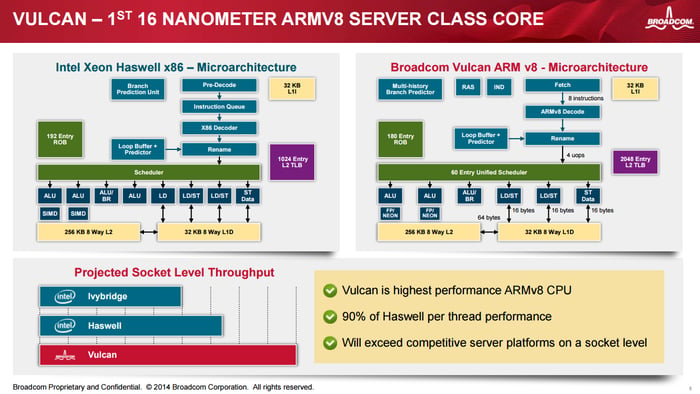 Given that Vulcan-based chips had the opportunity to both continue to participate in a growing networking chip market, as well as potentially go after the multi-billion dollar server processor market, why did Broadcom pull the plug on the project?

Maintaining a development pipeline full of competitive processor cores is neither easy nor cheap. Such projects require substantial (and growing) investments, and the market for such processors is ruthlessly competitive.

Intel, which dominates the server processor market, has also been pushing very aggressively into the network processor market. The company said in a presentation last year that its market share in network processors was just 5% in 2013, but according to Intel data center chief Diane Bryant, that figure is set to balloon to 12% this year.

Broadcom's intent before winding down Vulcan may have been a sort of "block and tackle" -- a block against Intel's incursion into the network processor space, hence the direct comparison to Intel's processors in that 2014 slide deck, while trying to grab share in Intel's server processor business.

Perhaps before its merger with Avago to form Broadcom Limited, Broadcom may have been willing to deal with the heavy investment levels required to merely participate in this fight. However, on its most recent earnings call, Broadcom CEO Hock Tan made a statement that perfectly outlines its rationale for carefully picking which businesses to participate in:

Our business model is very financially driven. We sell components. We sell very engineering-based components where each of -- in each of our product lines, business units, we are the -- not just the market leader, we are the technology leader, very, very clearly. This can be the niche market that some of them have become and our big end markets, regardless that's our business model.

By only participating in markets in which it is the obvious technology leader, it can win a premium for its products, leading to higher gross profit margins. In markets where Broadcom is not as competitive, it faces weaker margins, thanks to pricing pressure, combined with elevated operating expenses as the company invests heavily to keep up with the competition.

This is one instance where smart management can prove its worth by cutting losses short and focusing the business on its core competencies. Though Vulcan is no longer in the pipeline, Broadcom's focused strategy seems to be working as its stock notched a new all-time high following its strong fourth quarter earnings report and the doubling of its dividend.