Shares of Palo Alto Networks (NYSE:PANW) have fallen nearly 30% this year, due to slowing sales growth, widening GAAP losses, and the threat of rising competition. By comparison, the PureFunds ISE Cybersecurity ETF (NYSEMKT:HACK) -- which owns a basket of top cybersecurity-related stocks -- rose 4% during that period.

Will Palo Alto fall even further next year? Let's take a closer look at its tailwinds, headwinds, and valuation to find out. 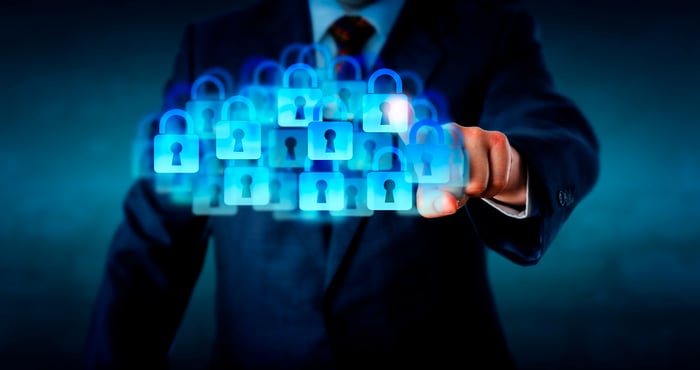 The good news for Palo Alto -- which is bad news for companies, governments, and other organizations -- is that the number of data breaches is rising worldwide. That's why the global security market could grow from $122.45 billion today to $202.36 billion by 2021, according to Research and Markets.

Palo Alto is widely considered the "best in breed" provider of next-gen firewalls. It serves over 35,000 customers in more than 140 countries, and has added over 1,000 new customers per quarter for 20 straight quarters. Over 85 of the Fortune 100 and half of the Global 2000 companies use its services, and Gartner has ranked it as an enterprise firewall market leader for the past five years.

Looking ahead, Palo Alto's Next-Generation Security Platform -- which bundles together natively integrated technologies, automated protection solutions, and threat intelligence sharing solutions in an all-in-one platform -- could widen its moat against bigger tech companies like Cisco (NASDAQ:CSCO) and Symantec (NASDAQ:NLOK). Palo Alto is also frequently cited as a potential takeover target for those larger companies, but its enterprise value of $11 billion makes it a pretty big buy.

On the surface, Palo Alto looks like a great growth play. But if we dig beneath the headline numbers, the cracks start appearing. The first issue is its slowing sales growth. Its revenue rose 34% annually to $398.1 million last quarter, but that missed estimates by $2.1 million and represented its slowest growth rate since its IPO in 2012.

That slowdown was attributed to slower enterprise spending, tougher competition in the firewall market, and a market shift from on-site appliances to automated solutions and subscription-based software and services. Those headwinds might be acceptable for a company with a lower valuation, but Palo Alto's price-to-sales ratio of 8 leaves little room for disappointment.

The second issue is its widening GAAP losses. Last quarter, Palo Alto's GAAP loss widened from $39.9 million in the prior year quarter to $61.8 million. That loss was mainly caused by its stock-based compensation (SBC) expenses, which surged 55% annually and claimed 29% of its revenues. Unless Palo Alto can get those costs under control, many investors will likely question its ability to ever generate a real profit.

Lastly, competition in the firewall and perimeter security market remains fierce. Cisco bundles technologies it gained by acquiring Sourcefire, ThreatGRID, and other smaller security companies into its networking hardware and software. Symantec dramatically expanded its end-to-end security capabilities with the acquisitions of Blue Coat and LifeLock, and Fortinet (NASDAQ:FTNT) has bundled additional security services into its next-gen firewalls. If Palo Alto increases its R&D or sales and marketing expenses to counter those threats, its SBC expenses will likely spike and cause its GAAP losses to widen.

2017 won't likely be Palo Alto's "worst" year ever. That title will still belong to 2016, which saw the stock's worst full-year performance since its IPO. But 2017 also probably won't be a turnaround year for the stock, unless it can either report accelerating sales growth or narrower GAAP losses.