After 60 consecutive years of dividend increases, it may seem a little disingenuous to ask if The Procter & Gamble Company (NYSE:PG) will raise its dividend next year. Management has already indicated that it plans to allocate roughly as much cash to dividends in fiscal 2017 as it did in fiscal 2016 (in the ballpark of $7 billion), so there's a decent probability that the company's streak of annual dividend bumps will continue.

It may be more appropriate to question how much the dividend could improve. If so, my short answer is, probably not by much. The following table shows the average quarterly dividend paid by P&G for each of the last five calendar years. Note that the corporation typically increases its dividend payment in the month of April.

Over a string of recent quarters, dividend expansion has nearly ground to a halt. This is a function of several challenges to revenue and earnings P&G faces. Like its consumer goods conglomerate peers, the company has to deal with an increasingly skittish consumer, global economic uncertainty, and a strong U.S. dollar, which crimp P&G's earnings abroad. The greenback in particular continues to surprise observers, having hit a 14-year high this month against the basket of six other major currencies known as the U.S. Dollar Index.

As top-line revenue has declined in total by 12% over the last three fiscal years (June 30 year-end), and operating income has decreased by 3%, P&G's payout ratio -- that is, total dividends paid divided by net income -- has jumped dramatically: 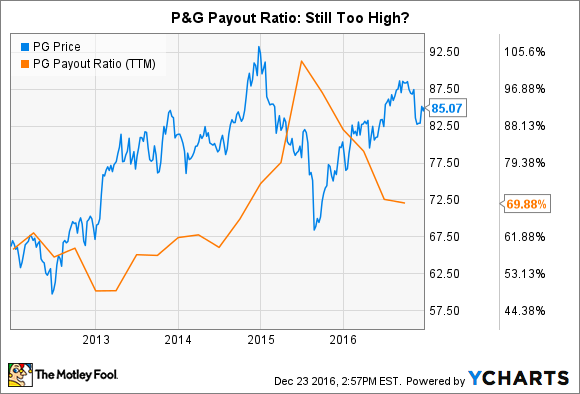 Though the payout ratio has recovered from a spike between 2014 and 2015, the current reading of nearly 70% is too high for comfort. It's generally accepted that a payout ratio of under 50% indicates a sustainable dividend. Conversely, payout ratios that approach 100% are often red flags for investors. P&G's ratio gives us one clue that earnings improvement might take priority over a generous dividend hike for now.

Another clue comes courtesy of the company's fiscal 2017 outlook. Procter & Gamble management has issued preliminary fiscal 2017 guidance that calls for a revenue increase of just 1% and earnings-per-share growth in the mid-single digits. In addition to its commitment to fund at least $7 billion in dividends next year, the company intends to move forward with $5 billion in share repurchases. Management expects capital expenditures to run at a rate of 5% to 5.5% of total fiscal 2017 revenue, which, given the very slight top-line increase, will equate to approximately $3.5 billion.

The three items above total $15.5 billion in estimated 2017 cash outlay. But with a flat revenue projection, the company will likely see operating cash flow near fiscal 2016's total of $15.4 billion.

Thus, on a practical level, there seems to be little room to advance the dividend much further beyond 2016's payout. So, we can infer from management's cash use projections that the dividend increase may follow a pattern more similar to 2015 and 2016 -- a total hike of just 1% to 3%.

What happens beyond fiscal 2017?

Of course, higher earnings would decrease the payout ratio and provide some flexibility to return to substantial dividend increases. P&G has spent much of the last two years exiting unprofitable lines of business and reducing its focus to 10 major product categories in which it believes it can hold a leadership (i.e., No. 1 or No. 2) position.

Indeed, at the outset of the current fiscal year's first quarter, P&G transferred no less than 41 beauty brands to Coty Inc. (NYSE:COTY) through a tax-advantaged share-exchange transaction. The transaction itself produced a shareholder-friendly reduction of outstanding P&G shares worth $9.4 billion.

The new P&G is a leaner, more focused business, with the potential for improved profits. But followers of the venerable consumer-facing giant won't see tangible margin expansion overnight. A return to 6%-7% dividend increases certainly could fit within the newer, optimized business structure P&G is evolving. But for shareholders watching their quarterly checks, it may be more realistic to look for this magnitude of improvement in fiscal 2018.

Will The Procter & Gamble Company Raise Its Dividend in 2017? @themotleyfool #stocks $PG $COTY Next Article
Current