Shares of consumer electronics and furniture retailer Conn's (NASDAQ:CONN) tumbled 46% in 2016, according to data provided by S&P Global Market Intelligence. A combination of slumping comparable-store sales and continued losses in the credit business led to the decline.

Conn's business model revolves around providing financing to its customers. During the third quarter of 2016, 94% of sales were either financed or rent-to-own, with 72% of sales financed through Conn's in-house financing arm. This business model hit major problems in 2014 when loose credit standards in previous years led to major credit losses, and the subsequent tightening of credit standards led to declines in comparable-store sales.

Comparable-store sales dropped 3.4%, 5.1%, and 10.1% during the first, second, and third quarters of 2016, respectively. The credit business posted a loss in each quarter, with a total loss before taxes of $141.4 million through the first nine months of the year. This more than wiped out the profit generated by the retail business, leading to a net loss. 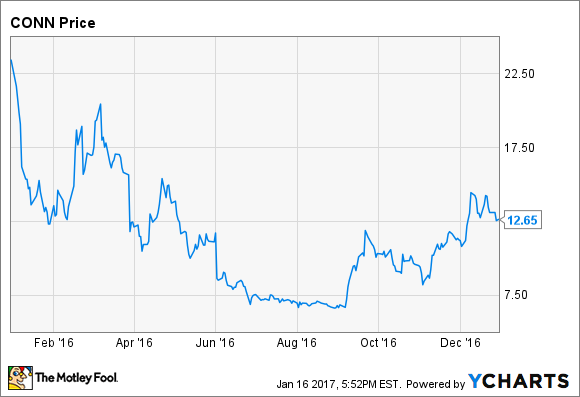 Conn's continues to build new stores, so total revenue is declining more slowly than comparable-store sales. Still, the company faces the difficult challenge of returning the credit business to profitability, which inevitably means tightening credit standards, while not negatively affecting the retail business, which is driven primarily by the credit business. The company clearly didn't strike the right balance in 2016.

Conn's pointed to changes in its underwriting as the main driver behind the steep drop in comparable-store sales during the third quarter. Even adjusting for these changes, Conn's estimates that comparable sales would have still dropped by 0.1%. Fixing the credit business is necessary for Conn's to survive in the long run, but the company's efforts are having a massive negative impact on the retail business.

The credit business doesn't appear to be improving, with the segment's loss growing during the third quarter on a year-over-year basis on lower revenue. Through the first nine months of 2016, credit losses nearly doubled. It will take time for the underwriting changes to percolate through Conn's credit portfolio, but there appears to be little reason for optimism at the moment.