Buyout rumors are always good for a quick pick-me-up. The boost doesn't always lead to an actual deal, though.

Shares of Charter Communications (CHTR -0.49%) rose 12.5% in January of 2017, according to data from S&P Global Market Intelligence.

The stock was enjoying a quietly positive January, working through the recent buyout of Time Warner Cable, when the hunter became the hunted. Near the end of the month, the rumor mill started reporting that Verizon Communications (VZ -1.77%) might want to buy Charter outright. Share prices jumped on the rumor and have not cooled down yet. 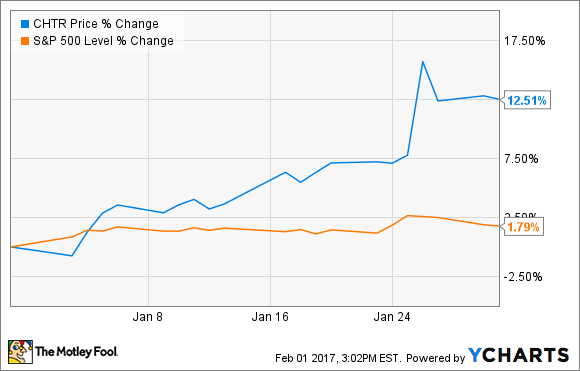 Combining Verizon with the Time Warner Cable-inflated version of Charter would create a behemoth with a market cap north of $300 billion and another $200 billion in combined net debt. Verizon may be hungry for growth by acquisition, but this suggested deal looks crazy on paper. Regulators would have a field day with the overlapping markets between the two companies, and Verizon would almost certainly have to divest itself of its remaining wired phone networks plus the FiOS fiber-optic data and video business.

In simple terms, I don't think this dog will hunt. Let the rumors fade out and Charter's shares readjust before taking another look at this stock.

Why Charter Communications Is Plummeting 14% Today