Shares of Macy's (NYSE:M) have lost more than half of their value since mid-2015, as the world's largest department-store company has been hit hard by declining mall traffic. Macy's has been reporting comp-sales declines for two full years. Recently, rumors have been swirling that management may be ready to throw in the towel and sell the company.

It's true that Macy's is facing significant declines in revenue and earnings. It expects comp sales to decline by about 3% in fiscal 2016, while earnings per share will be down by almost a third relative to the peak of $4.40 in fiscal 2014. But as the strongest company in a fragmented industry, Macy's is well-positioned to profit from consolidation and the disappearance of weaker rivals in the coming years.

Among mall-based department stores, Macy's and J.C. Penney (OTC:JCPN.Q) are the two behemoths. Macy's currently has more than 700 locations in the U.S.; J.C. Penney has more than 1,000. However, they face a wide array of smaller competitors in the mid-price tier. (I am not even counting Sears Holdings for the purposes of this analysis, as it has already retreated from many of the typical department-store merchandise categories.)

First, there are several medium-size regional department store companies that operate roughly 300 stores each. Dillard's (NYSE:DDS) and Belk (privately owned) focus on the South, while Bon-Ton Stores (NASDAQ: BONT) mainly operates in the Northeast and Midwest.

There are also a handful of smaller regional chains, typically still operated by their founding families. These include Boscov's in the eastern U.S., Bealls in Florida, and Von Maur in the Midwest.

It's unusual to see such fragmentation in an industry facing severe profit pressure. Typically, the smaller and weaker players would either merge to gain more scale -- and perhaps pricing power -- or go out of business altogether.

Among Macy's smaller competitors, Bon-Ton Stores is clearly the weakest link. Bon-Ton expects to report a comparable-store sales decline of 2.5% to 3.5% for fiscal 2016, compared to its initial guidance for a 0%-1% increase. The company is persistently unprofitable and free cash flow has been negative for the past two years: 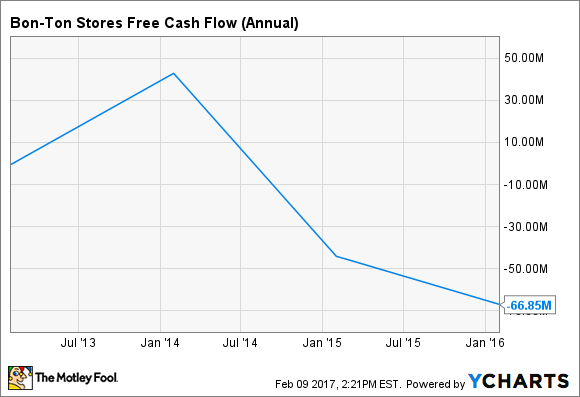 To stay solvent, Bon-Ton has cut investments to the bone. This will make it harder to drive a sales recovery in the future.

Finally, Bon-Ton Stores has more than $500 million of debt maturing in December 2018. If mall traffic continues to decline, it's unlikely that the company will be able to refinance that debt. This could set the stage for a bankruptcy filing -- perhaps followed by a sale or liquidation of the entire company.

Bon-Ton faces a real risk of insolvency within the next two years. Image source: Bon-Ton Stores.

Dillard's and Belk aren't in nearly as much danger as Bon-Ton for now. However, they could also struggle to stay profitable as independent businesses.

For years, Dillard's has focused on returning as much cash to shareholders as possible, holding capital expenditures at extremely low levels. This stingy attitude may finally be catching up with it. Net income declined about 20% year over year in fiscal 2015, and analysts expect a similar drop for fiscal 2016.

Indeed, through the first three quarters of 2016, comp sales fell 5% year over year at Dillard's. It still generates plenty of free cash flow, but if sales continue to decline, management (which mainly consists of the founding family) may have to take more drastic action.

Meanwhile, Belk doesn't publicly report its results anymore, as it was taken private in late 2015 by Sycamore Partners in a $2.7 billion leveraged buyout. However, it's highly unlikely that it has escaped the sales pressure currently faced by Macy's and Dillard's.

Bankers had a hard time financing the Belk deal in 2015, before mall traffic took a turn for the worse. If industry conditions continue deteriorating, Belk will struggle to manage this heavy debt load, making bankruptcy a likely outcome.

J.C. Penney is at risk, too

Even J.C. Penney could find itself in dire straits if mall traffic continues to decline. While the company is on track to report a third consecutive year of positive free cash flow, it still has a high debt load and is barely profitable.

Furthermore, J.C. Penney has fallen far short of its revenue goals for fiscal 2016. It's possible that CEO Marvin Ellison's sales growth initiatives will regain traction in 2017. However, if sales start to decline, it wouldn't take much to put J.C. Penney on the ropes again. As it is, the company plans to close some stores this year.

Macy's could be the big winner

Among all of the mid-tier department stores in the U.S., Macy's has by far the best real estate. It also has the biggest and best-developed e-commerce platform. That's why it still generates about $2 billion in operating cash flow and $1 billion in free cash flow on an annual basis: 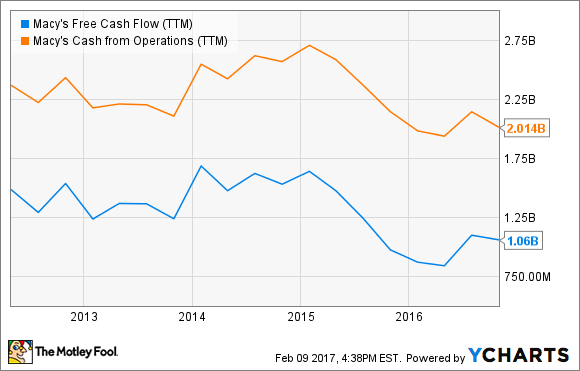 It's possible that mall traffic will continue to shrink, as the bears expect. But if that's true, it will have an even bigger impact on Macy's competitors. Ultimately, this is likely to force some of the smaller players to merge with rivals in order to keep up. Weaker companies like Bon-Ton could disappear entirely.

This process will lead to a more concentrated and more profitable department store industry. As the largest department-store company in the U.S., Macy's will be a big beneficiary.

Macy's Last Line of Defense: Everyone Else at the Mall @themotleyfool #stocks $M $JCPN.Q $DDS Next Article
Current