Starbucks (NASDAQ:SBUX) and PepsiCo (NASDAQ:PEP) are both well-known American brands and components of the S&P 500. Both stocks also outperformed the S&P 500's 73% gain over the past five years -- Starbucks rose 130% and PepsiCo climbed 75%.

Comparing Starbucks to PepsiCo might seem like apples and oranges, since the former is a coffee chain and the latter makes soda, beverages, and packaged foods. However, the strength of both companies' brands makes their stocks appealing to conservative investors who want to buy what they know. 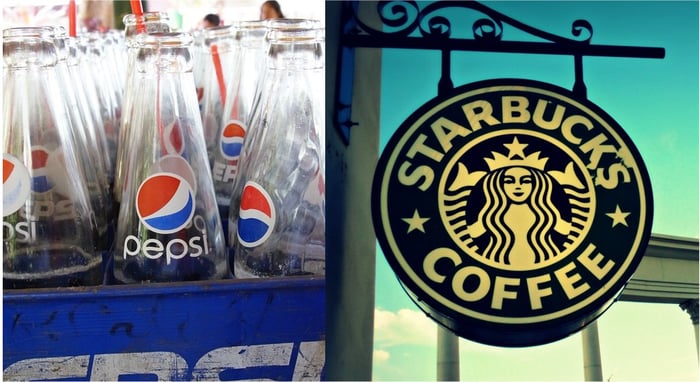 So today, we'll take a closer look at Starbucks and PepsiCo's growth trajectories, profitability, valuations, buybacks, and dividends to see which is the better long-term buy at current prices.

How fast are Starbucks and PepsiCo growing?

Starbucks' revenue rose 17% in 2015 and 11% in 2016, and this year it expects growth of 8% to 10%. That growth sounds decent for a mature coffee chain like Starbucks, but the company has also missed top-line estimates for four of the five past quarters -- which caused its stock to dip 4% over the past 12 months.

One culprit is the EMEA (Europe, Middle East, and Africa) region, which posted negative comps growth for three straight quarters. Another culprit is its slower comps growth in the China-Asia Pacific (CAP) region, which raises concerns that Starbucks could be overextending its brick-and-mortar presence. That region posted 18% annual sales growth last quarter, but that was mainly attributed to over 300 new store openings. Total comps across the region only rose 5%, compared to 3% in the Americas. In the U.S., Starbucks noted that the growing popularity of its mobile orders inadvertently caused longer delays for pickup customers. 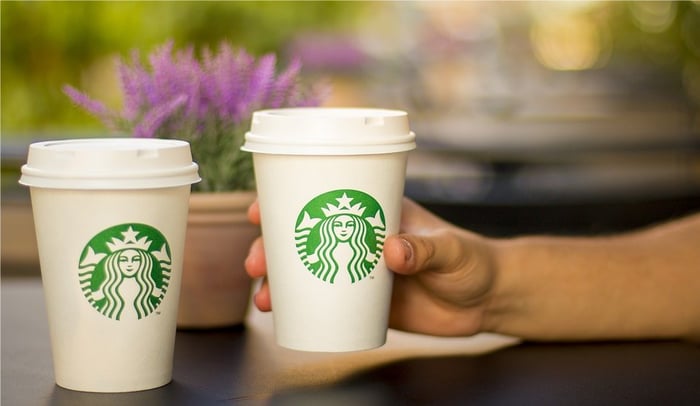 PepsiCo's annual revenue fell 5% in 2015, remained nearly flat in 2016, and is expected to rise less than 1% this year. Those numbers sound mediocre, but investors should note that PepsiCo focuses more on organic revenue growth, which excludes the impact of acquisitions, divestments, currency impacts, and other one-time charges. On that basis, PepsiCo's revenue rose 5% in 2015, 4% in 2016, and is expected to grow "at least" 3% this year. The company topped both top- and bottom-line estimates for three straight quarters, and its stock rallied 9% over the past 12 months.

Looking further ahead, analysts expect Starbucks to grow its earnings at an average rate of 15% over the next five years. PepsiCo is expected to post 6% earnings growth during that period. Those estimates give Starbucks a 5-year PEG (price/earnings to growth) ratio of 1.7 and PepsiCo a PEG ratio of 3.4. Since a PEG ratio under 1 is considered "undervalued," neither Starbucks nor PepsiCo looks particularly cheap. However, Starbucks looks cheaper relative to its long-term growth potential -- if analyst estimates prove accurate.

Which company is more shareholder-friendly?

By those measures, PepsiCo looks like the better play for investors who value sustainable buybacks and dividends.

Starbucks isn't a bad investment, but its high-growth days are over, and certain big bets -- like the Chinese market and its digital expansion -- could backfire if they're not properly executed. Its valuation looks cheaper than PepsiCo's on a forward basis, but the market for premium coffee chains could wither quickly during prolonged economic downturns.

PepsiCo's business isn't exciting, but it's better diversified and doesn't depend on lopsided bets, and the stock pays a better dividend. Therefore, I believe that PepsiCo is a better long-term play than Starbucks at current prices.