The retailer failed to grow sales during the fourth quarter, but the good news overwhelmed the bad.

Best Buy reported fourth-quarter revenue of $13.48 billion, down 1% year over year and $140 million below the average analyst estimate. Domestic comparable sales fell 0.9%, with Best Buy blaming product availability issues across multiple vendors and weak demand for gaming products for the decline. The online business was a bright spot, with sales surging 17.5% year over year. 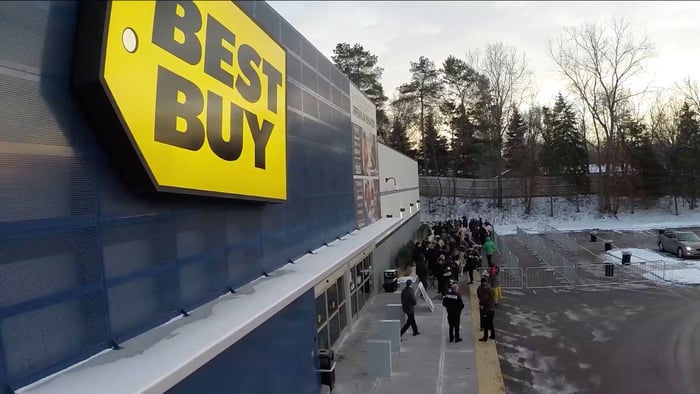 Non-GAAP EPS came in at $1.95, up from $1.53 in the prior-year period and $0.28 higher than analysts were expecting. Despite the slump in sales, gross margin jumped 80 basis points year over year while operating costs remained flat as a percentage of revenue. This led to a 14% surge in operating profit, with share buybacks further boosting the per-share numbers.

In addition to reporting a significant increase in profit, Best Buy boosted its quarterly dividend by 21%. Best Buy has paid a special dividend in previous years on top of its regular dividend, but that practice appears to have been replaced with a major dividend increase instead. Best Buy also allocated $3 billion for share buybacks over the next two years, enough to buy back one-fifth of all outstanding shares.

Best Buy's fourth quarter was mixed, but investors accepted the reasoning behind the sales decline and instead focused on surging profits and increased capital returns. Best Buy's ability to grow its gross margin even as sales declined shows that the company didn't get too caught up in promotional activity, instead focusing on the bottom line.

Benefiting from an extra week in fiscal 2018, Best Buy expects to grow total revenue by 1.5% and operating income by a low-single-digit percentage. Share buybacks will drive much of the company's per-share earnings growth this year, but with the stock trading for less than 14 times adjusted earnings, that's not a bad thing.