Just because some early investors in IMAX's Chinese subsidiary sell out doesn't mean the parent company is doomed.

Stock trading for IMAX Corporation (IMAX 1.07%) was halted last Wednesday when news broke that private-equity firms FountainVest Partners and China Media Capital (CMC), early investors in IMAX China, had sold their remaining investment in the company. Shares of IMAX China promptly fell 9% on the news, and IMAX investors were left wondering what this all meant.

This isn't the first time this pair of investors have sold IMAX China shares. In March of 2016, CMC and FountainVest negotiated an agreement to sell 20 million shares prior to the end of the lockup period that expired the following month. In return, they extended the lock-up for their remaining shares by an additional three months. A look back at the history of ownership activity by these investors may help put this sale in perspective. 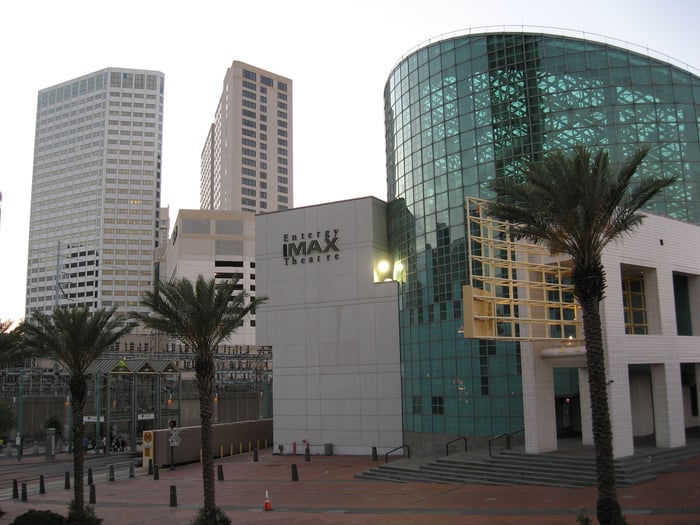 In April 2014, IMAX sold a 20% stake in IMAX China to FountainVest and CMC for $80 million, with each taking a 10% stake. IMAX concluded that having Chinese stakeholders as partners would help it navigate the complex conditions in China and eventually pave the way for an initial public offering (IPO) of the Chinese subsidiary. This left IMAX holding 80% of the IMAX China.

In a statement at the time, IMAX Corp. CEO Richard L. Gelfond said:

China is an enormously complex market in which we have accomplished quite a bit over the last 15 years. At this juncture, it makes sense to bring in Chinese investors to help us better address local market dynamics and further optimize our business in China...We believe...CMC, as well as FountainVest, are ideal partners whose status, leadership and expertise will be invaluable in helping us accomplish these goals.

IMAX eventually scheduled the IPO of IMAX China on the Hong Kong Stock Exchange for October 2015, with the funds raised being dog-eared for expanding the company's presence in the world's most populous country. FountainVest and CMC also sold a portion of their stakes during the IPO.

The Fate of the Furious in IMAX should be a hit in China and elsewhere. Image source: IMAX.

This is pretty normal

It isn't unusual for pre-IPO investors to sell after the lock-up period is over, especially since it expired in July 2016. The purpose of the lock-up is to prevent insiders and early investors from flooding the market with shares soon after the IPO. This gives ordinary investors time to evaluate the company based on the financial statements and metrics, without having to worry about near-term volatility tied to massive sales by insiders. Additionally, selling stock in a company after the lock-up expiration is the only way for early investors to realize their gains. Keep in mind that FountainVest and CMC first invested in IMAX China nearly three years ago, and since the IPO alone, shares have gained nearly 35%.

The shares sold by these early investors were purchased by a "prominent international investment bank," according to the press release, and this should improve liquidity and the availability of shares.

IMAX still owns 68.2% of IMAX China and derived 31% of its annual revenue from China, so it should benefit in coming years as it builds out its backlog of theaters there.

And analysts still anticipate strong growth from the segment -- Gary Yu of Morgan Stanley expects a 43% increase in revenue for IMAX China this year, with fan favorites as Fast 8, Transformers: The Last Knight, and Spider-Man: Homecoming all set to release.

Ultimately, the fortunes of IMAX China, and indeed IMAX as a whole, depend more on its international expansion and the slate of movies than of stock changing hands. As a shareholder and frequent movie-watcher, I'm excited to see what the year will bring, both for the stock and on the big screen.