Please ensure Javascript is enabled for purposes of website accessibility
Free Article Join Over 1 Million Premium Members And Get More In-Depth Stock Guidance and Research
By Tyler Crowe - May 5, 2017 at 1:49PM

Shares of California Resources Corp. ( CRC ) are up 23% as of 11:45 a.m. EDT. Today's gain is mostly attributed to the oil and gas producer's better-than-expected earnings results, although oil prices being up 2% likely helped the situation as well.

On a normalized basis, California Resources posted a per-share loss of $1.02 versus Wall Street expectations of a normalized per-share loss of $1.26 in the most recent quarter. The company was able to produce the earnings beat mostly because of higher price realizations, but it also helps that it is cutting costs and maintaining relatively flat production even though capital spending has been quite low lately. One of the big fears with oil and gas producers is that if they cut capital spending too much, then production will decline quickly. 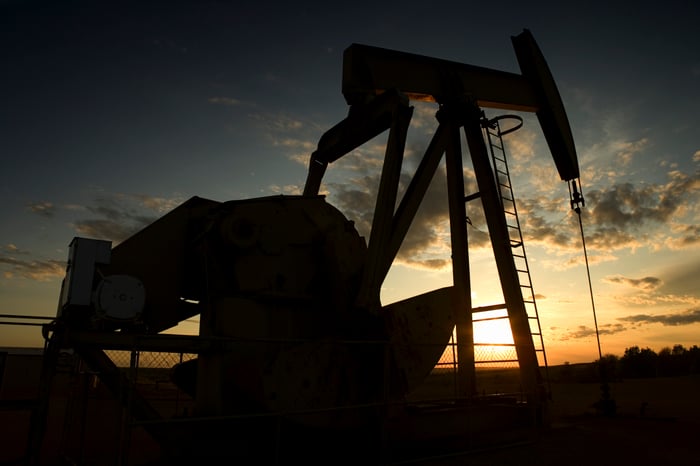 These factors meant that the company was able to generate a decent amount of free cash flow for the quarter, which management used to pay down debt. Considering that California Resources' debt load has been a point of concern for investors lately, this seems like a pretty good idea.

On top of the announcements of better-than-expected results, California Resources recently signed two joint ventures that will allow it to deploy an additional $500 million in capital to evaluate some of its unproven acreage and to increase production. These two things -- growing reserves and production -- have been absent from the company's results as of late. So, hopefully, these deals will help down the road.

Ultimately, though, California Resources remains a highly indebted exploration and production company that is sensitive to oil and gas prices. At current prices, the company is still producing negative earnings but free cash flow. Perhaps that will change soon as oil prices are in the $50 range, but it doesn't necessarily seem worth it for investors when other exploration and production companies are producing positive results today.