As we head toward the Memorial Day holiday, many of the companies listed on the stock market will take a breather, too... at least as far as dividend raises are concerned. With the approach of summer, we're moving away from the latest earnings season, and there were relatively few payout hikes last week.

That doesn't mean the scene was idle, though. A clutch of companies declared higher distributions, including the following three notables. 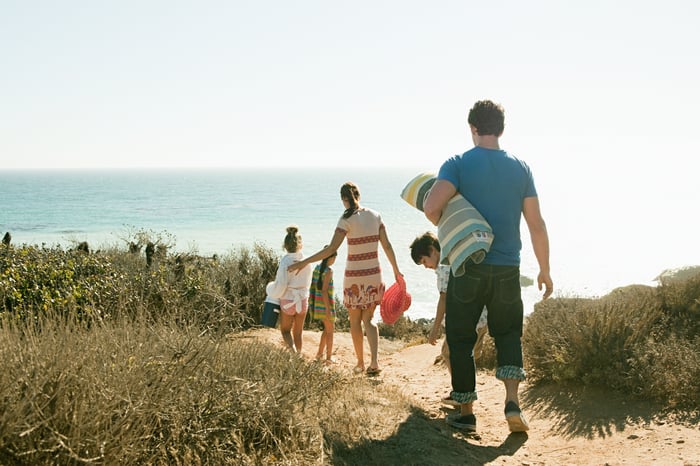 One of the more popular air carrier stocks on the market, Southwest Airlines (NYSE:LUV), is propelling its quarterly dividend 25% higher, to almost $0.13 per share. Additionally, the company's board authorized a new, $2.0 billion stock repurchase program, which replaces an expired initiative at the same amount.

At first, these moves might seem counterintuitive. On the face of it, Southwest's first quarter wasn't anything to jump in the air about, with revenue edging up only 1%, against costs that rose by nearly 9%. On the bottom line, adjusted net profit dove by 35%. Neither adjusted earnings ($372 million, or $0.61 per share) nor revenue (nearly $4.9 billion) hit the average analyst estimate.

Yet there was plenty to be cheered about in those results, not least of which was the company's high net margin -- no easy feat in an industry with persistently high costs. Another positive was that Southwest notched a new all-time high for first-quarter operating profit, at over $1.6 billion. That's almost triple what the company shelled out for dividends and share buybacks during the period. This bodes very well for the future of its payout. 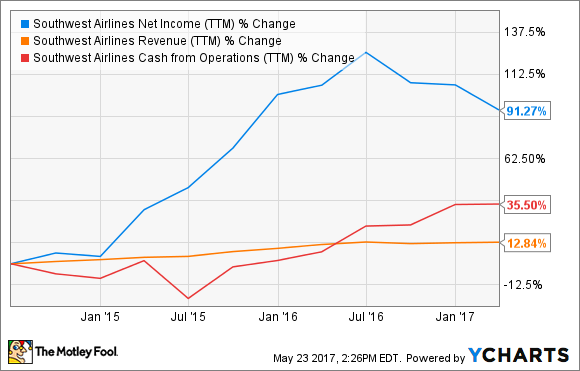 Southwest's new dividend is to be dispensed on June 28 to stockholders of record as of June 7. At the most recent closing share price, it would yield 0.8%. That's well under the current 1.9% average yield of dividend-paying stocks on the S&P 500.

The carrier did not give an end date for its new share buyback program.

Veteran aerospace and defense contractor Northrop Grumman (NYSE:NOC), as per its once-a-year habit, has raised its quarterly dividend -- by 11% to $0.90 per share. The company didn't hesitate to mention that this represents the 14th straight year it has improved its payout. 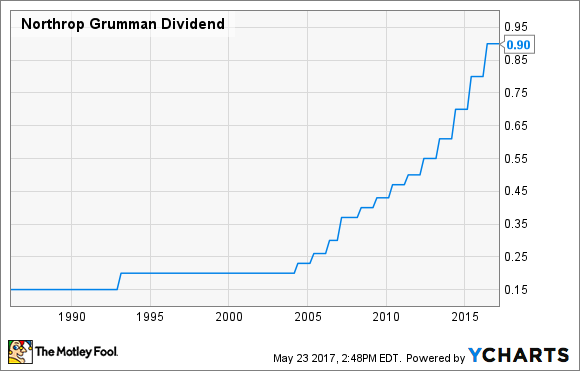 In contrast to fellow airborne stock Southwest Airlines, Northrop Grumman blew the market away with its first-quarter results. There was very little not to like: Sales were a sturdy 5% higher on a year-over-year basis, while net profit grew a very encouraging 15%. Both line items ($6.3 billion and $640 million, respectively) thrashed analyst estimates.

The world needs the kind of products made by Northrop Grumman and its peers; witness the recent series of arms deals signed by Saudi Arabia and other Gulf states with the U.S. that will amount to roughly $350 billion. The immediate future looks quite good for the defense industry.

One slightly worrying development for Northrop Grumman in that otherwise stellar first quarter is operating cash flow -- high consumption plunged that line item into the red, to the tune of $439 million. The company should right that aircraft, though; it's sticking with its projections of a $1.8 billion to $2.0 billion surplus for this fiscal year. This should be sufficient to cover the company's dividend, and a shareholder-pleasing level of share buybacks.

Northrop Grumman will pay its next dividend on June 21 to investors of record as of June 5. It yields a theoretical 1.4% on the current share price.

KeyCorp (NYSE:KEY), one of the numerous regional banking groups doing its thing in smaller markets, is bumping its quarterly dividend $0.01 (or 12%) higher to just under $0.10 per share.

KeyCorp is a bulkier entity than it used to be thanks to the company's acquisition of fellow regional First Niagara, in a $4 billion deal that was consummated last July. This helped KeyCorp increase its total revenue by 44%, net interest income by 52%, and per-share adjusted net income by 33%. The latter, by the way, topped analyst estimates -- the third quarter in a row the bank has achieved this feat.

KeyCorp has done a fine job expanding from its core Rust Belt operations. The First Niagara deal in particular gives it a presence in complementary Northeast markets, particularly upstate New York, Pennsylvania, and Connecticut. Due to synergies, it should also save money -- KeyCorp is on pace to cut annual expenses by around $450 million, up from an initial estimate of $400 million.

Which, of course, potentially means a significant bulge in the company's coffers. Last year, the bank managed to grow its free cash flow by almost 70% to $1.4 billion, and with the bulked-up operations and lower expenses, there's probably more where that came from. Last year's pile easily covered both dividend payouts and share buybacks, and I can't imagine that dynamic will change anytime soon. 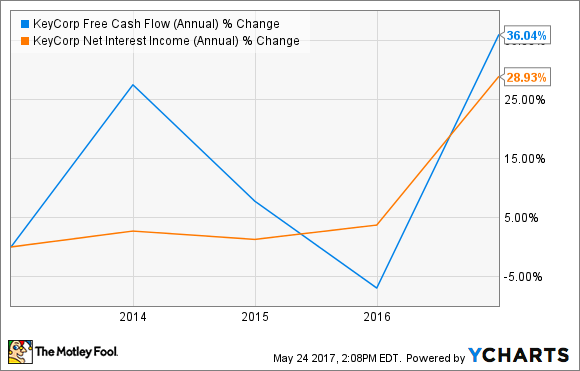 KeyCorp's upcoming distribution is to be paid on June 15 to shareholders of record as of May 30. At the company's most recent closing stock price, it would yield 2.1%.