Pharmaceutical giant Merck (NYSE:MRK) has been on a roll recently, with anti-cancer drug Keytruda winning approval for multiple manifestations of the disease. An approval for one particular indication last month continues the good news for the drug and has broader implications for the drug industry and personalized medicine.

The FDA issued an accelerated approval for Keytruda to treat patients with solid tumors with certain biomarkers. (For those biotech nerds out there, this approval came for tumors with a biomarker called microsatellite instability high (MSI-H) or mismatch repair deficient (dMMR).) The approval covers patients who have progressed despite prior treatments and have no other treatment options, and those who have colorectal cancer that has progressed despite chemotherapy. 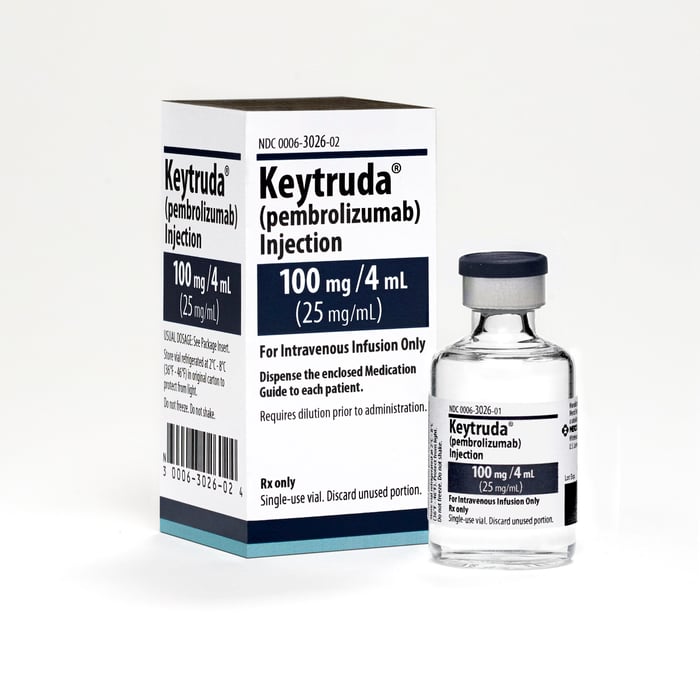 What makes the FDA action monumental is that this is the first approval for a cancer treatment that's indicated by a specific genetic feature of the tumor, independent of where the tumor originated. The press release from the FDA explains the significance:

"This is an important first for the cancer community," said Richard Pazdur, M.D., acting director of the Office of Hematology and Oncology Products in the FDA's Center for Drug Evaluation and Research and director of the FDA's Oncology Center of Excellence. "Until now, the FDA has approved cancer treatments based on where in the body the cancer started -- for example, lung or breast cancers. We have now approved a drug based on a tumor's biomarker without regard to the tumor's original location."

Errors in DNA replication happen all the time, but normal cells have a facility for repairing DNA mutations before they can cause any damage. Tumors with MSI-H or dMMR result from abnormalities in the ability to repair DNA, either as a result of an inherited condition called Lynch syndrome, or because of a spontaneous mutation that isn't passed on genetically. Tumors of this type occur most commonly in colorectal, endometrial, and gastrointestinal cancers but can also originate in many other locations. Approximately 5% of metastatic colorectal cancer patients have this kind of tumor, and as many as a million people in the U.S. have Lynch syndrome and an 85% chance of contracting colon cancer.

Tumors with these markers exhibit a microenvironment of a particularly high degree of immune activity, but inhibitory strategies of the cancer, including the PD-1 checkpoint, prevent the immune system from eliminating them. This is why Keytruda, a PD-1 checkpoint inhibitor, is particularly effective against these types of tumors.

The approval was based on five trials in which patients who tested positive for one or both of these markers were given Keytruda every two or three weeks. Of the 90 patients with colorectal cancer, there was an overall response rate of 36%. The remaining 56 patients had a variety of solid tumors, including endometrial, biliary, gastric or GE junction, pancreatic, small intestinal, breast, prostate, bladder, esophageal, thyroid, small-cell lung, and renal-cell cancers, sarcomas, and retroperitoneal adenocarcinoma. These patients had an overall response rate of 46%.

Keytruda on the rise

Merck's Keytruda is riding a string of victories and is proving to be Merck's most promising source of growth in the next few years. The drug was approved for metastatic melanoma last summer, and last October the FDA approved it for first-line treatment of non-small-cell lung cancer that has high PD-L1 expression. The win scored a huge victory over Bristol-Myers Squibb's Opdivo. Since then, the drug has been approved for head and neck cancer and classical Hodgkin lymphoma. In May alone, Merck won approvals for bladder cancer and first-line treatment of all non-small-cell lung cancer in combination with chemotherapy.

The best news may still be ahead for Keytruda. The drug is now a part of 500 trials for a wide variety of cancers. The $584 million in sales of the drug last quarter is still only around half of what Opdivo is doing, and both drugs are still in the early stages of life in the marketplace.

The first-ever FDA approval of a drug for cancers with a particular genetic feature independent of location is a big milestone in the emerging field of personalized medicine. That Merck was the first to score this sort of win speaks well of Keytruda and the company's execution of its clinical strategy. The investment and medical communities should sit up and take notice.