Kinder Morgan (NYSE:KMI) kept itself busy during the second quarter wrapping up a slew of strategic initiatives. The biggest was the completion of an IPO of its Canadian unit Kinder Morgan Canada Limited (TSX:KML), which will likely have an impact on its second-quarter results. Here's a closer look at how that transaction, and a few other items, might affect the company's quarter and future growth prospects.

While Kinder Morgan operates several assets in Canada, its Canada segment had previously only included the financial results of its Trans Mountain Pipeline. Consequently, the segment last quarter only generated $43 million in earnings, which is a fraction of what its other segments produce each quarter: 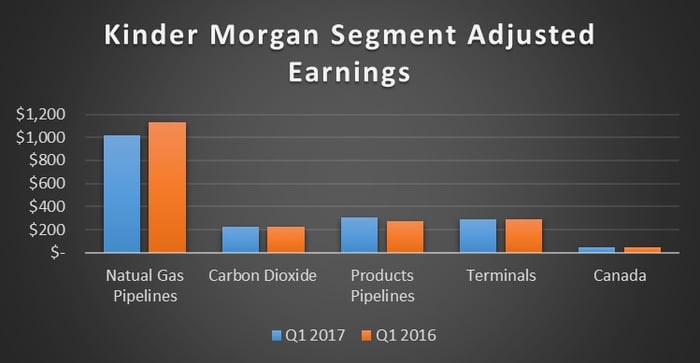 That said, the company shifted several assets from both its terminals and products pipelines segments to Kinder Morgan Canada Limited, which made that entity more attractive to investors. Investors should therefore notice higher results from Kinder Morgan Canada Limited this quarter, along with an associated decline in results from the other two segments.

Another impact of this transaction is that it will reduce Kinder Morgan's leverage ratio from 5.4 times net debt to adjusted EBITDA to 5.2 times. That moves the company much closer to its goal to get debt below 5.0 times before it starts ramping up cash returns to investors.

Watch for changes to the company's backlog

Kinder Morgan's capital project backlog has been an evolving number over the past year. After pulling two projects out due to lackluster return prospects, and completing or partnering several others, the company began this year with $12 billion of projects in the backlog. That number fell to $11.7 billion at the end of the first quarter after it placed the Kinder Morgan Export Terminal in service.

The backlog could drop even more given the moves the company made during the quarter. That's because it not only sold a 30% stake in Kinder Morgan Canada Limited, and its associated growth projects, via the public offering but it also sold a 49% stake in its $1.3 billion Elba LNG project to private equity.

That said, there is at least one new project coming down the pipeline that might have helped the company start replenishing the backlog. That project is the proposed Gulf Coast Express Pipeline Project, which would move natural gas from the Permian Basin to the Texas coast. The company moved quickly to partner the project with DCP Midstream (NYSE:DCP), which bodes well for the likelihood that it goes forward with construction. It's a potential needle-moving project given that Kinder Morgan's management stated that this pipeline could represent a more than $1 billion investment for the company and DCP Midstream. Because of that potential positive impact, it would be great to see the company officially add it to the backlog during the quarter. 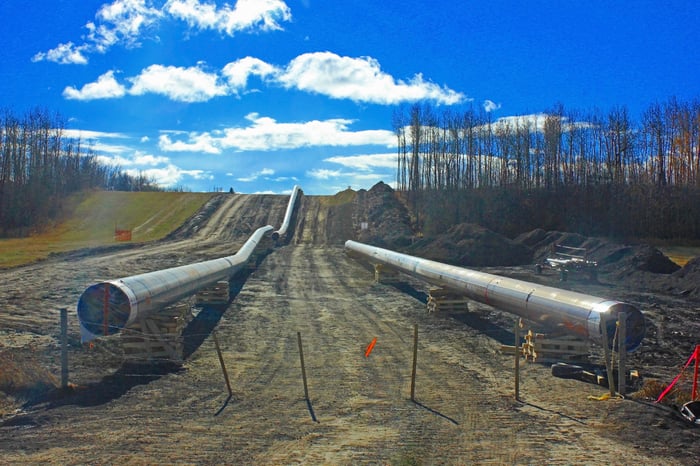 When Kinder Morgan announced its 2017 financial expectations last December, the company said that its priority for the year would be to continue shoring up its balance sheet. Its hope was that it would be able to secure financing for Trans Mountain, which would free up cash flow for other uses, including buying back stock, financing new growth projects, or increasing its dividend. The company, though, did state that it "currently believes the best way to maximize shareholder value will be to use a significant portion of that excess cash to increase its dividend." Furthermore, it noted that it "expects to provide guidance on a revised dividend policy in the latter part of 2017, with a view toward delivering additional value to its shareholders in 2018."

Given that timeline, it's unlikely that Kinder Morgan will announce its revised dividend policy this quarter. That might disappoint the market especially since some investors had hoped that the company might announce a new dividend policy last quarter. Because of that history, investors should watch for the potential that impatient investors might sell shares off again if the company doesn't offer any updates on the timing or magnitude of the revised policy. Such an event would undoubtedly be a buying opportunity given how cheap the stock is these days.

Kinder Morgan's second-quarter results might be a bit messy given the impact its strategic initiatives will likely have had on its segments and backlog. That said, these transactions have helped the company shore up its financial situation so that it's on a more sustainable long-term footing. Thus, the company will be in a position to start returning more cash to investors later this year, which could be the catalyst that finally jump-starts its stalled stock.