Oil prices have been stubbornly weak all year. We can blame that on shale producers since the industry has hit the accelerator on drilling activities this year, causing an output surge. While growing shale production could keep a lid on crude prices, there's reason to be optimistic that oil could rise both in the short and long term.

That said, even if crude prices don't rebound, Suncor Energy (NYSE:SU), Concho Resources (NYSE:CXO), and Hess (NYSE:HES) should thrive in the future. Here's why I'd buy any one of these oil stocks right now. 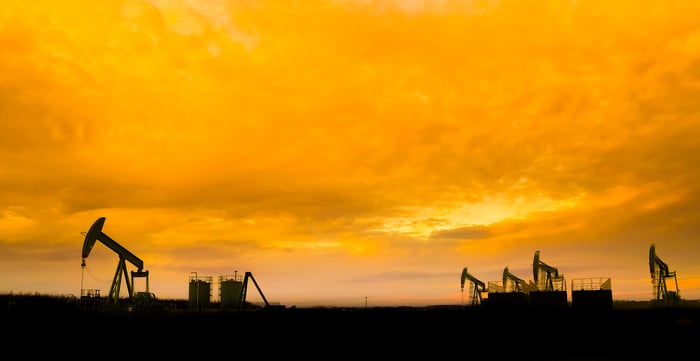 A pure-play on the Permian

One of the reasons U.S. oil production has risen past expectations this year is because companies like Concho Resources have reported remarkably robust well results. In the first quarter, for example, the Permian Basin driller delivered 13% quarter-over-quarter organic oil growth, which pushed production past the high-end of its guidance range. Because of that, the company increased its full-year outlook, which should see it boost output by 21% to 25%.

There's plenty more growth left in the tank at Concho Resources since the company controls 19,000 low-cost drilling locations in the Permian, which could unlock as much as 8 billion barrels of oil equivalent resources in the years ahead. That resource base positions the company to deliver exceptional long-term growth, with it currently forecasting 20% compound annual crude production growth through 2019, which it can do while living within cash flow at around current prices. Meanwhile, with one of the lowest leverage ratios in its peer group, Concho has the balance sheet strength to keep thriving if oil price volatility picks up. Even better, investors can buy this fast growing oil stock for about 5% cheaper than it was at the start of the year, due entirely to crude's 13% sell-off.

This cash flow machine is just getting started

Canadian oil sands giant Suncor Energy has navigated through the oil market downturn quite well. Thanks to its top-notch balance sheet and ample cash flow, the company was able to take advantage of market conditions to make several acquisitions that will boost production in both the near and long-term. Further, the company was able to continue financing two major growth projects, which should start bearing fruit later this year.

One of the outcomes of Suncor Energy' strategic initiatives is that the company expects to produce more than 8 billion Canadian dollars ($6.4 billion) in funds from operations this year. That's up from about CA$6 billion ($4.8 billion) last year and more than enough to cover the $5.2 billion ($4.1 billion) it expects to spend on capital expenditures and dividends. That excess cash flow gives it the money not only to strengthen its already rock-solid balance sheet but restart its share repurchase program. Meanwhile, the company's free cash flow should be meaningfully higher next year given that its largest growth projects will start flowing oil later this year. The ramp up from those projects should fuel 10% compound annual production growth per share through 2019 and could push the company's cash flow past its prior record of CA$9.4 billion ($7.5 billion) in 2013 when crude averaged about $100 a barrel. Given that forecast, this seems like an excellent time to buy the stock, especially since it's down 7% this year. 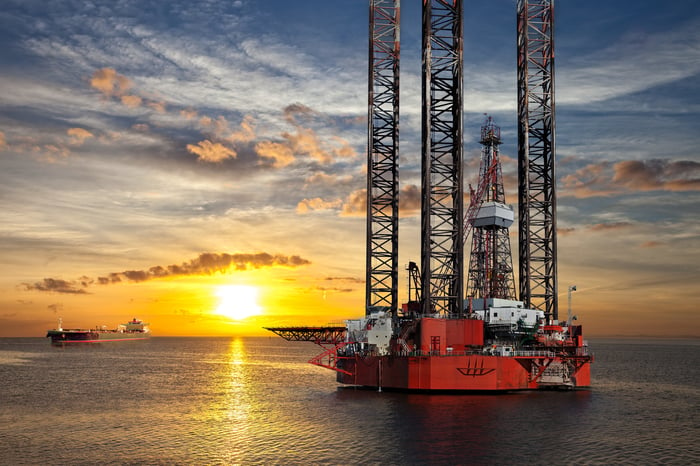 Despite sharing many similarities with Concho and Suncor, Hess' stock has gotten unfairly pounded this year, falling nearly 30%, which has vastly underperformed the drop in crude. That plunge has come despite the fact that it too boasts a top-tier balance sheet, including the second lowest leverage ratio in its peer group. Further, it has visible growth on the horizon, with plans to increase output 8% to 12% by the end of this year. If there's any difference, it's that Hess has more diversification since it operates in two major shale plays as well as in several offshore fields. However, that gives the company more flexibility as it seeks to capture higher oil prices in the future.

In the near-term, Hess' biggest growth driver is its prime position in the Bakken shale of North Dakota where the company is in the process of tripling its rig count to boost output. That activity ramp puts the company on a trajectory to grow production from 100,000 barrels of oil equivalent per day (BOE/d) to 175,000 BOE/d in the future. In addition to that, the company is working with Chevron (NYSE:CVX) and other partners to bring the $6 billion Stampede deepwater Gulf of Mexico project online next year. Chevron estimates that the field will produce 80,000 barrels per day and could unleash 300 million BOE in its lifetime. Meanwhile, Hess and ExxonMobil (NYSE:XOM) recently approved phase one of the Liza Field offshore development in Guyana. That $3.2 billion project should produce 120,000 barrels per day by 2020 as it unlocks the 450 million barrels of oil just underneath that section of the field. Overall, ExxonMobil believes that Liza holds as much as 2.5 billion barrels of oil equivalent resource potential, which has the companies already prepping for Liza Phase 2. This balanced combination of onshore and offshore opportunities puts Hess in the position to grow output at a healthy clip for the next several years, which could fuel big returns for investors, especially at today's stock price.

Oil stocks for any season

Oil might be down this year, but it's unlikely to stay there forever. However, even if it does, Suncor, Concho, and Hess should do well because all three generate healthy cash flow thanks to their low-cost resources. When combined with their strong balance sheets, these companies can continue growing even if oil were to fall. That ability to thrive amid an uncertain market is why I'd buy any one of them right now, especially in light of their oil-induced sell-offs this year.