The retail industry has been a great big puddle of uncertainty lately. E-commerce juggernaut Amazon.com, Inc. has numerous traditional retailers trembling in their boots. Still, many believe that the fear driving retailers down is overblown, if not unfounded.

Today's contestants are on the short list of companies that many believe can make a stand against the online behemoth and have a meaningful existence in a world dominated by e-commerce: leading home-improvement store The Home Depot, Inc. (NYSE:HD) and big-box retailer Target Corporation (NYSE:TGT). The numbers don't lie, so let's dive into several meaningful metrics and see which one is better equipped to survive and even thrive. 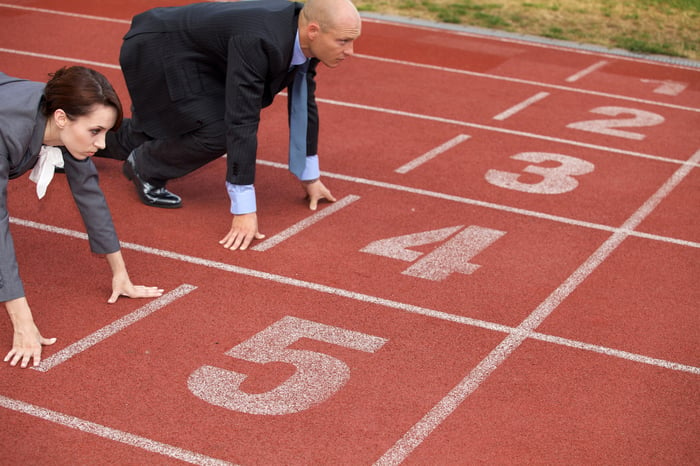 Which company is better equipped to make a stand against e-commerce? Image source: Getty Images.

While these cash piles might seem excessive, it's good for companies to squirrel some away for a rainy day, and they pale in comparison with the mounds of debt these companies carry relative to their cash. The good news is that each company could extinguish its debt in less than three years, if all things remain equal. With positive net income and significant free cash flow, these two seem similarly matched in financial fortitude.

In its most recent quarter, Home Depot reported sales of $23.9 billion, up 4.9% year over year. Comparable-store sales increased 5.5%, while comparable sales at U.S. locations grew 6% over the prior-year quarter. Net income grew by 12% and earnings per share increased 16%, both over the prior-year period.

Until the Kenmore deal, investors had thought Home Depot's hardware and home-improvement niche was immune to the threat e-commerce poses, but a more realistic view took hold this week. You might be surprised to know, however, that Home Depot has been growing its own internet presence, which recently increased online sales by 19% and accounted for 5.9% of its revenue. The company has been effectively leveraging its physical footprint, as 45% of online orders are picked up in-store.

Target has several initiatives it is adopting to stay relevant in a world dominated by e-commerce. The company has been sacrificing margins and profit in an attempt to drive foot traffic in its store. It is also testing several delivery programs to better compete with Amazon, including same-day shipping, boxing and shipping essentials, and preparing in-store pickup orders within an hour.

With better recent results, and for blending online and in-store sales, Home Depot gets the nod.

Over the past 12 months, neither company has kept pace with the broader market, which was most recently up by about 13%. Home Depot has gained a maudlin 7%, while Target has fallen an astonishing 26%, beaten down by fears of e-commerce and slumping same-store sales. Given Home Depot's uninspiring but still positive stock performance, you'd expect it benefit from a higher valuation -- and you'd be right. 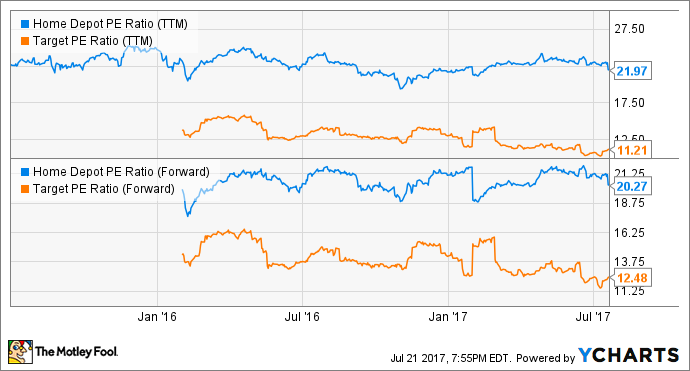 Home Depot sports a price-to-earnings ratio of 22 times trailing earnings. Target is priced at a much lower 11 times trailing earnings. Looking forward doesn't change the market's view. Home Depot's forward multiple of 20 is still higher when compared with Target's less expensive forward multiple of 12. It appears investors have much greater confidence in Home Depot's ability to stave off the beast.

With one company enjoying much greater stock-price appreciation and the other sporting a cheaper valuation, there is no clear winner.

Over the past year, both companies have exhibited shareholder-friendly tendencies, by buying back shares and paying a dividend. Home Depot's diluted shares outstanding have fallen by 2.9% over the past four quarters, while Target's share count is down by over 5%. Pulling back even further, Target has been buying back shares aggressively for the past two years, lowering its count by 13%, compared with just over 6% for Home Depot.

In terms of dividends, Target's share-price underperformance has juiced its dividend yield, which currently sits at 4.38%, more than double Home Depot's 2.15%. Both companies are similarly matched in terms of payout ratio. Home Depot is currently spending 44% of its earnings to fund its dividend, compared with Target's slightly higher 48%. Anything in a range of 35% to 55% is considered healthy. Home Depot thus has more room to increase its dividend, particularly in the face of its growing sales and profitability. 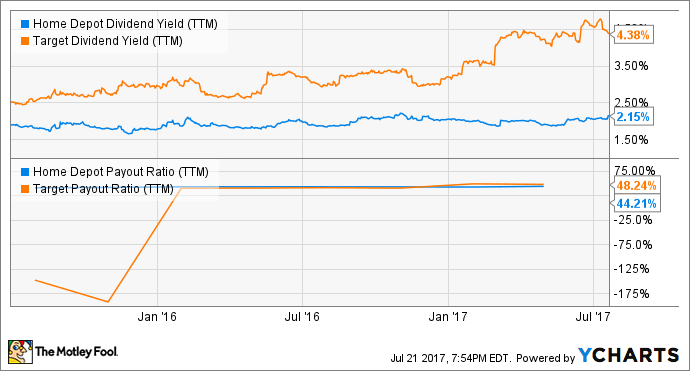 For buying back more shares and sporting a higher yield, the nod goes to Target.

And the winner is... Home Depot

The vote wasn't nearly as close as it appeared. Home Depot is in a much better place currently, and its spot in the home-improvement, hardware, and tools market should give it a level of insulation from the ongoing trend toward e-commerce. Most consumers would rather grab items and go for their weekend honey-do list. Still, as we learned this week, every company is at least somewhat vulnerable.