Over the past few years, ExxonMobil's (NYSE:XOM) investors have started to get a little concerned with the company's oil and gas production. Or, more specifically, a lack of production growth. Exxon has been known for decades as the steady ship in the stormy sea that invests rather consistently through the ups and downs of the commodity cycle. After a couple of years of belt tightening, though, its project portfolio did look a little leaner than it had in the past.

This past quarter, though, management went out of its way to highlight two parts of its portfolio that should help quell those fears of production decline rather quickly. Here are a few quotes from ExxonMobil's most recent conference call and some background on why these two projects are so monumental for ExxonMobil. 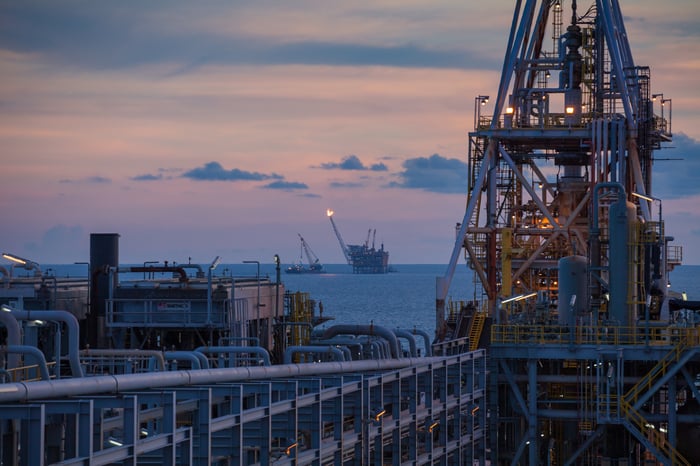 Stepping on the gas in Guyana

There has been a lot of chatter lately about ExxonMobil's oil discoveries off the coast of Suriname and Guyana. It wasn't that long ago that the company announced a significant oil reservoir there. Whatever oil it found, it looks like it was a good one, because it moved to the front of Exxon's project line to get the green light. Here's Vice President Jeff Woodbury giving the details of the final investment decision.

[W]e reached final investment decision on Phase 1 of the Liza development. First oil is expected by 2020, less than five years after the initial discovery. Phase 1 will develop 450 million barrels of oil from a floating production, storage, and offloading vessel, with production capacity of 120,000 barrels per day. This development is expected to cost $4.4 billion, resulting in a unit development cost of less than $10 per barrel and a projected double-digit return, even in a flat $40 per barrel price environment.

The numbers for this project are absolutely incredible. The only way to realize the strides Exxon made with this project is to compare it to other well-known projects. Let's take BP's (NYSE:BP) Mad Dog Phase 2 project as an example. This is a field BP discovered in 1998 and deployed its first phase in 2005. This phase 2 plan has already gone back to the drawing board multiple times and will now cost $9 billion for a 140,000 barrel per day increase in production that will start up in 2021.

Think about that. Mad Dog is a project in one of the most well known offshore hydrocarbon reservoirs in the world with access to the Gulf's immense pipeline and manufacturing centers. This Liza project is in a brand new reservoir with no infrastructure in place, and ExxonMobil says it can develop it for half the cost and one year faster.

Even more potential ahead

Here's the more incredible part of this discovery. The Liza production project could just be scratching the surface of what is there. Here's Woodbury describing what ExxonMobil has done thus far and how much more potential this region could have.

[T]otal gross recoverable resources on Stabroek Block are now estimated at 2.3 billion to 2.8 billion oil equivalent barrels. This higher estimate is driven by the results of Payara 2 and the previous Liza-4 well, which encountered more than 197 feet of high quality oil-bearing sandstone reservoir. The rig will next move to drill the Turbot and then Ranger prospects. These two prospects represent new play tests on the Stabroek Block. 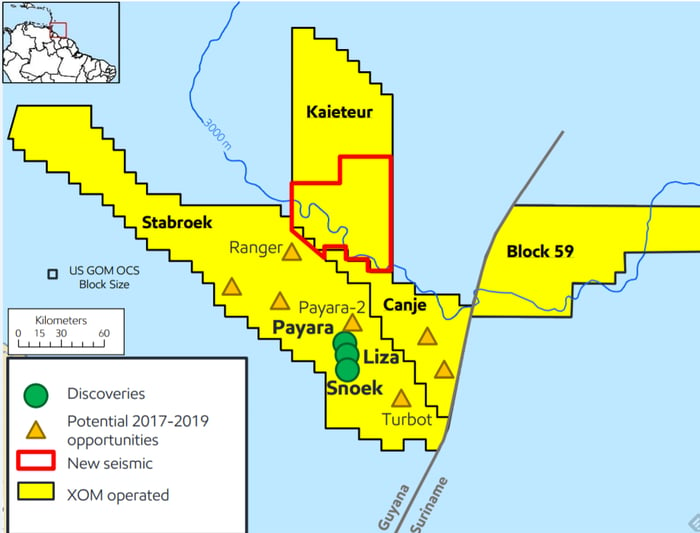 I have to point out that Exxon compares the size of this block to a standard U.S. Gulf of Mexico block. It just goes to show that this block could be a game changer for ExxonMobil. It's not that often you can say that when you consider ExxonMobil's size.

Powering up in the Permian

ExxonMobil and other integrated oil and gas companies caught a lot of flack in the early innings of the North American shale revolution. Analysts were quick to point out that independent oil and gas companies were running circles around the big guys posting eye-popping production growth levels and a willingness to spend big.

Here's the problem with this assessment; it assumes that these two types of companies had the same objectives and time scales. Most of these independents bet the farm on shale development and had to put up big production growth numbers at the expense of their balance sheet. They routinely outspent their cash generating abilities for pedestrian rates of return.

All that time, ExxonMobil took the same approach it always has used with reservoirs. It took its time to understand the reservoir and its drilling program was more based on learning than having to put up production numbers.

Thanks to this approach, Exxon was able to crack the code of its holdings in the Deleware Basin -- part of the larger Permian Basin -- and can now deliver fantastic returns on that production. Here's Woodbury describing Exxon's Permian expansion plans from here.

ExxonMobil's Permian assets rank among the top-tier investment returns in our global portfolio. Strong drilling and completion execution in the Midland Basin has to date yielded unit development costs of about $7.00 per oil equivalent barrel. We've been steadily increasing our Permian drilling activity through 2017. And our current net production is more than 165,000 oil equivalent barrels per day, an increase of 20% from the prior-year quarter.

Despite growing industry activity in the Permian, we have successfully offset inflationary pressure through increased efficiencies and high recoveries per well. And this includes, among other factors, a continuing reduction in drilling days and cost per foot as well as further improvement in completion designs. We currently have 16 operated rigs in the Delaware and Midland Basins combined, and expect to reach 19 total rigs by the end of August.

Later on in the call, Woodbury said that the long-term plan for the Permian was to increase production to 350,000 barrels per day. By taking a more methodical approach, the company now has a production source that costs less than $10 a barrel to develop and can represent close to 10% of its entire production portfolio.

ExxonMobil's production levels have been flat or declining as of late without several new project deliveries on the horizon to offset those declines. These two areas, though, give ExxonMobil immense new resources at extremely favorable economics. It's hard to find an offshore project that expects to have a better than 10% discounted cash flow return with oil at $40 a barrel, and development costs for shale in the single digits are great. Throw in some huge LNG projects in the U.S. Gulf Coast, Papua New Guinea, and Mozambique, and you have an astounding growth profile over the next few years that can thrive at today's oil prices.