Intel typically builds different chips for different segments of the personal computer market to meet the performance, power, and cost requirements for each of those segments. The chips launching today are "U-Series" chips, which the company says are targeted at "thin and light laptops, 2 in 1 computers, convertibles and minis." 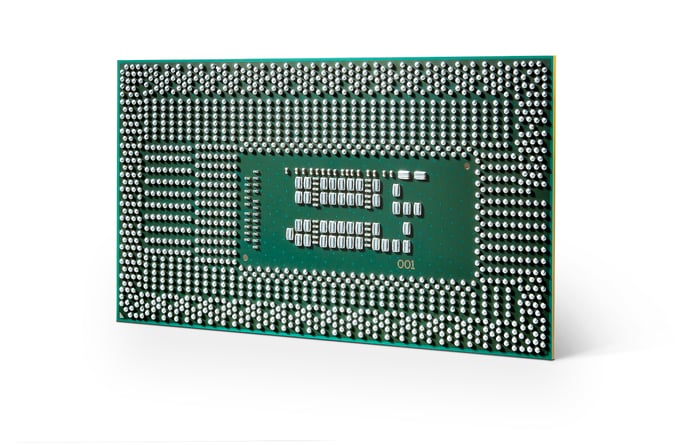 In other words, these chips should be suitable for a large swath of the personal computer market.

Let's go over what exactly Intel announced as well as what credible leaks tell us about the future products that should be coming under the eighth-generation Core banner.

Intel says that the Kaby Lake Refresh parts deliver "up to" a 40% improvement in performance compared to their corresponding Kaby Lake counterparts, which began rolling out in the third quarter of 2016.

The company says that this overall performance improvement comes from three key improvements.

The first is simply the fact that Intel stuffed two more cores into these chips. Intel's U-series processors have historically come with just two CPU cores (and Intel has worked to improve the performance capabilities of those cores over time), but with the Kaby Lake Refresh parts, Intel is bringing four cores to the table.

Per Intel, 25% of the generation-over-generation performance gain came from the increase in core count.

Accounting for the remaining 15% of the performance increase was a combination of manufacturing technology improvements as well as improvements in the very circuit implementation of the chips.

When Intel says manufacturing improvements, the company isn't talking about a transition from the 14nm+ technology that it introduced with the original Kaby Lake; Kaby Lake Refresh is still being manufactured using 14nm+.

Intel says that "because of the maturity and predictability of the 14nm+ process, the team was able to tighten up manufacturing parameters to get even more performance out of the product."

All told, the Kaby Lake Refresh parts look great; Intel is delivering more cores while at the same time boosting the performance delivered per core compared to the original Kaby Lake parts.

Coffee Lake and Cannon Lake for everything else

Although Kaby Lake Refresh should allow PC makers to refresh the bulk of their product lines, these chips won't cover everything.

That's where Intel's Coffee Lake and Cannon Lake parts will come in.

Coffee Lake-S is expected to address the mainstream desktop personal computer market, which Intel is currently addressing with its Kaby Lake-S parts. Coffee Lake-S, per recent leaks, is expected to roll out in two waves; the initial wave in the fourth quarter should be targeted primarily at gamers and PC enthusiasts, while a broader lineup for both consumers as well as corporate desktops is set to come in the first quarter of 2018.

Coffee Lake is also expected to come to the high-end of Intel's U-series notebook processor lineup in what is called a 4+3e configuration (quad core CPU with GT3e graphics) -- think Kaby Lake Refresh but with a bigger, more powerful graphics processor on board.

I also expect frequencies to move up further on the Coffee Lake mobile parts compared to the Kaby Lake Refresh parts thanks to the next-generation manufacturing technology.

And finally, Coffee Lake-H should come to the high-performance notebook market in a hex-core configuration (according to a leak from BenchLife.info), delivering more cores and higher per-core performance than the current quad-core Kaby Lake-H parts.