A compounded annual growth rate (CAGR) of 40%: That's how fast Accenture (NYSE: ACN) projects the market for artificial intelligence (AI) in healthcare will expand through 2021. You've probably read plenty of articles talking about how AI will transform the world as we know it. It's not just hype -- and definitely not when it comes to the healthcare industry.

Much of that growth will come from small companies that are privately held (for now). However, there are several public companies moving forward aggressively with AI initiatives focused on the medical sector that you can invest in now. Here's why Google parent Alphabet (NASDAQ:GOOG) (NASDAQ:GOOGL), International Business Machines (NYSE:IBM), and NVIDIA (NASDAQ:NVDA) stand out as three of the top artificial intelligence stocks in healthcare. 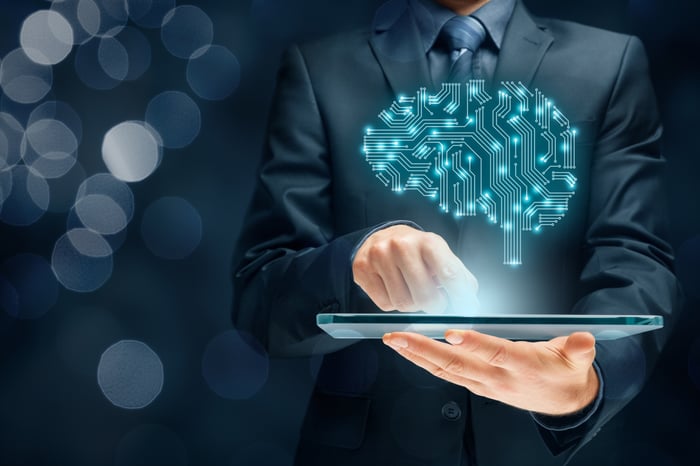 Alphabet believes that "AI is poised to transform medicine, delivering new, assistive technologies that will empower doctors to better serve their patients." The technology giant has multiple initiatives underway to help achieve that goal.

One major effort Alphabet is taking is using AI to help screen for diabetic retinopathy, an eye disease that's the fastest-growing cause of preventable blindness in the world. The company developed a computer vision system that analyzes images of patients' retinas and identifies diabetic retinopathy at similar rates as U.S. board-certified ophthalmologists. Another area Alphabet is focusing on is an AI system that can help pathologists detect breast cancer in lymph node biopsies.

There's a lot more that the company hopes to be able to accomplish with AI in healthcare. For example, Alphabet has also partnered with the University of California San Francisco, the University of Chicago, and Stanford University to accurately predict medical events based on patterns in de-identified medical records.

Of course, most of Alphabet's revenue and earnings continue to come from selling advertising, with especially strong growth recently in mobile search and YouTube ads. The company's AI efforts remain only a small part of the value proposition for the stock. However, Alphabet's AI initiatives in healthcare (and other areas) could become an increasingly important source of revenue in the future. The stock appears to be a good choice for investors hoping to ride the AI wave.

IBM doesn't use the phrase "artificial intelligence" very often with its healthcare focus. Instead, the company prefers the term "cognitive health." Whatever it's called, though, Big Blue is a major player in advancing AI in the healthcare industry. 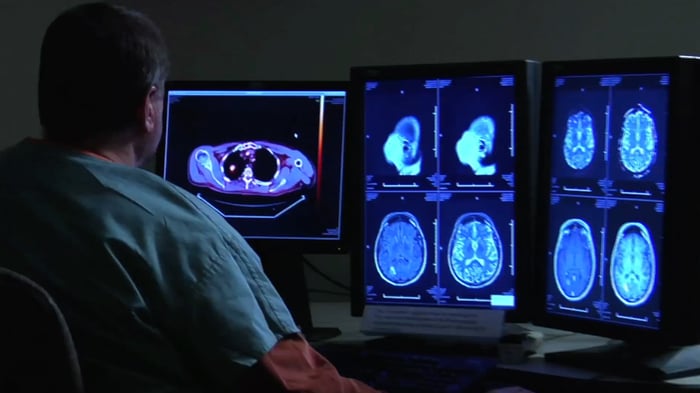 IBM stock hasn't performed well lately, though. The company has experienced 21 quarters in a row of year-over-year revenue declines. However, I think IBM remains a good choice over the long run -- and its dividend yield of nearly 4.2% is definitely attractive.

You can't talk about where AI is today without including NVIDIA in the conversation. The fast-growing chipmaker's initial focus was on graphics processors for gaming systems, but researchers found out those processors were also great for AI algorithms. NVIDIA dove into AI deep learning headfirst in 2015 with the launch of Tegra X1 chip.

Many organizations currently use NVIDIA's products to implement powerful AI solutions for healthcare. For example, personalized medical technology company HeartFlow uses NVIDIA's chips in its computer vision algorithms that analyze medical imaging data to create a personalized 3D model of a patient's heart and coronary arteries. Stanford University uses NVIDIA technology in an AI application that analyzes photos of skin lesions and classifies them as benign or malignant at accuracy levels achieved by dermatologists.

NVIDIA stock has soared over 160% in the last year and is up more than 1,000% over the last five years. As a result, the stock is priced to perfection, with shares trading at 42 times expected earnings. There could be some volatility in the months ahead, but the potential for AI in healthcare and practically every other industry is large enough that NVIDIA should continue to be a winner over the long run.