Halloween is a special time of year for Comcast's (NASDAQ:CMCSA) Universal Orlando. Halloween Horror Nights 27 kicks off tonight, greeting as many as tens of thousands of guests on select event nights to a scare fest complete with nine haunted houses, five scare zones, and two signature stage shows.

We may be a month and a half from the actual Halloween holiday, but it's never too early to scare up some profits. Visitors pay as much as $109.99 for a one-night ticket, paying as much as $139.99 on top of that if they don't want to wait in long lines for the themed walk-throughs. Throw in the gobs of money spent on food, specialty cocktails, and event merchandise and it's probably an educated guess that Comcast is making more money at night than it is during the day.

Larger rival Disney (NYSE:DIS) knows that all too well, having started its own hard-ticket event -- Mickey's Not-So-Scary Halloween Party -- in late August this year. It's never too early to lean on tricks if you're Comcast or treats if you're Disney. 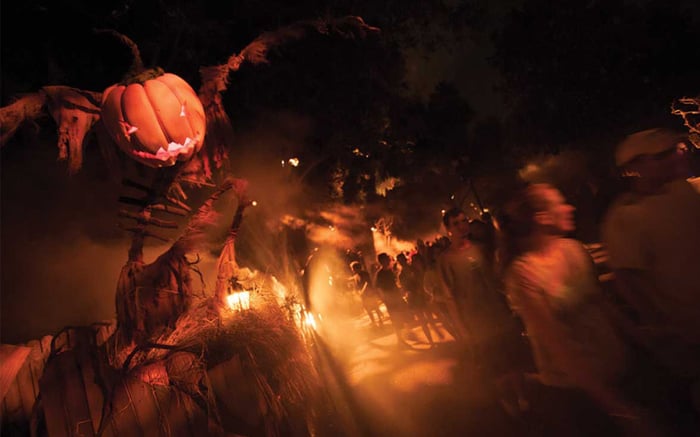 The theme parks can use a good pick-me-up. Hurricane Irma just slammed Florida, and both Disney World and Universal Orlando had rare closures, shutting down their parks on Sunday and Monday. The storm also took out one of Disney's Mickey's Not-So-Scary Halloween Party events. We'll see if any more storms disrupt operations during this busy hurricane season.

The industry is going through a lull. Disney World attendance has been stagnant for the past year and a half, and the once-heady growth of turnstile clicks at Universal Orlando appears to be decelerating.

Theme parks aren't the primary moneymakers of each parent company. Disney relies on its media networks division as its top driver. Comcast naturally has its industry-leading cable television business. However, given the problematic state of the television industry, it's easy to see why Comcast and Disney can't afford to let their gated attractions suffer.

Comcast and Disney may not depend on their theme parks to be the primary breadwinners, but they work in conjunction with everything else that they have going in their arsenals. Disney parks are loaded with its intellectual properties. Comcast doesn't openly push its cable and broadband platforms, but its NBCUniversal movies and shows are well represented across the resort. Getting people to Universal Studios Florida for the next month and a half -- even if it's under the pretense of a good seasonal scare -- is a way to hook visitors on Comcast's other moneymakers. The scares are coming, though folks in Central Florida when Hurricane Irma hit earlier this week will rightfully argue that they're already there.