This week, AutoZone (NYSE:AZO) posted earnings results for its fiscal fourth quarter that included an uptick in sales growth after three straight quarters of deceleration. The expansion pace, and the earnings improvement it powered, was weaker than the company's long-term average, though.

Here's how the big-picture results stacked up against the prior year:

Autozone's revenue growth flipped back into positive territory to help the auto parts and services retailer end the fiscal year with minor comparable-store sales gains that still trailed the prior year's pace. 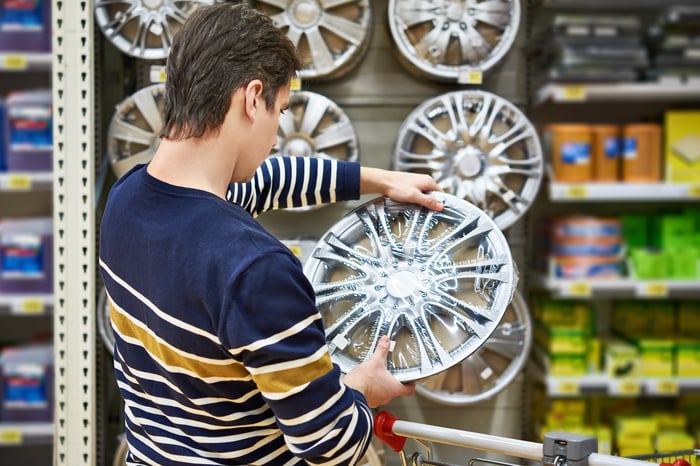 While noting that AutoZone's expansion pace is still below average, executives said they were encouraged by the return to growth. "Our [comparable] store sales rebounded modestly from the previous two quarters," CEO Bill Rhodes said in a press release. "Sales were still moderately below our recent historical experience," he continued, "and we attribute this shortfall primarily to the continuing headwinds resulting from two consecutive mild winters."

Rhodes highlighted the retailer's progress at improving the shopping experience through initiatives that cut store delivery times and increased product availability. "We continued to fine-tune our inventory availability initiatives," he explained, "including our multi-deliveries per week to stores and we expanded the number of mega hub locations."

Given that they see the recent slump as having more to do with weather than any weakening of the retailing environment, Rhodes and his team are confident that they'll manage growth in fiscal 2018. It's not clear whether those overall gains will be closer to this past year's tiny comps increase that generated a 6% earnings boost, or to the prior year's healthier bounce that powered a 13% profit spike.

In either case, the retailer plans to continue investing in building out its supply chain, with a new distribution center slated to open in Florida in a few months. It will direct resources toward its online sales channel, too, which so far hasn't contributed much toward AutoZone's expansion. But investors will be watching comps over the next few quarters for evidence that the company has put the sales growth slowdown trend behind it.