Please ensure Javascript is enabled for purposes of website accessibility
Log In Help Join The Motley Fool
Free Article Join Over 1 Million Premium Members And Get More In-Depth Stock Guidance and Research
By Keith Speights - Oct 10, 2017 at 6:04AM

What does an ideal investment portfolio look like for retirees? The answer to that question varies based on each individual's financial position and goals. However, nearly every retiree wants to have solid dividend stocks in their portfolios. 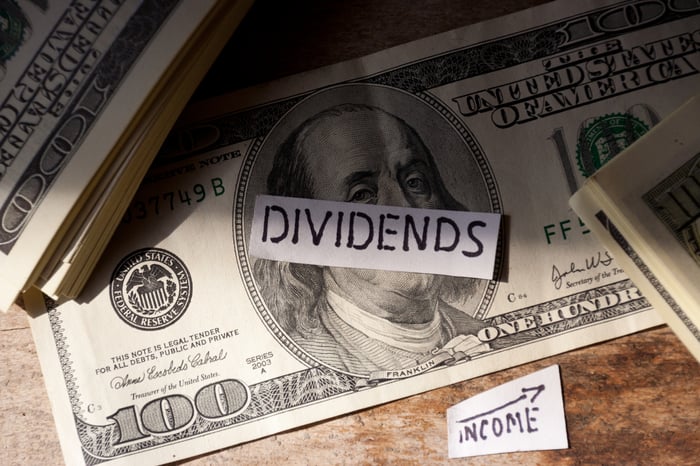 AbbVie's dividend yields 2.83% right now. For most of the last 12 months, the biopharmaceutical company's yield topped 3.5%. But the reason why AbbVie's yield has fallen is a really good one: The stock has soared around 45% so far this year.

Pretty much everything has gone right for AbbVie lately. The company has posted strong results each quarter in 2017. It's gotten good news from approval of a new hepatitis C drug. Most important, AbbVie secured a deal that keeps a major biosimilar rival to top-selling autoimmune disease drug Humira off the U.S. market through early 2023.

A top priority for retired investors is dependable income. AbbVie easily checks off that requirement. The company has increased its dividend payout a whopping 60% since being spun off from parent Abbott Labs in 2013. Counting the time it was part of Abbott, AbbVie has raised its dividend for 45 years in a row, and the company appears to be in great shape to keep those dividend hikes coming well into the future.

Of course, retirees don't mind getting some growth along with that income. AbbVie should be in a solid position to deliver on that front, as well. Wall Street analysts project the company will grow annual earnings by 14% over the next five years.

With tremendous current blockbusters like Humira and cancer drug Imbruvica, combined with an outstanding pipeline, AbbVie likely will meet or exceed that earnings-growth goal.

Johnson & Johnson isn't too far behind AbbVie with its divided yield of 2.54%. And J&J lays claim to an even more impressive dividend track record, with 55 consecutive years of dividend hikes. The healthcare giant uses less than 55% of its earnings to fund the dividend program, so investors should be able to count on more boosts to the dividend down the road.

However, not everything has gone right for J&J like it has for AbbVie. The company reported lackluster year-over-year sales growth of only 1.9% in the second quarter. J&J's pharmaceutical segment actually saw sales drop slightly from the prior-year period. This was particularly disappointing, since the pharmaceutical segment is the company's biggest moneymaker and its best source of growth historically.

Retirees shouldn't have much to worry about, though. Johnson & Johnson's year-over-year comparisons were negatively impacted by a one-time adjustment of U.S. rebate accruals in the second quarter of 2016. While the company faces competition for its top drug Remicade, several other products are enjoying strong growth, including multiple myeloma drug Darzalex and Imbruvica (with which J&J partners with AbbVie). Even with some headwinds, J&J stock has still posted better performance than the S&P 500 so far this year.

Over the longer term, the prospects for Johnson & Johnson stock seem bright. The company boasts one of the top drug pipelines in the world and has continued to make strategic acquisitions to boost each of its business segments. I expect this big healthcare company to continue being a winner for retirees for decades to come.

If you really like a strong dividend, Pfizer could be just the healthcare stock for you. The big pharma company's dividend yields 3.56%. Pfizer doesn't have the great streak of dividend hikes that AbbVie and J&J claim because the company cut its dividend in the midst of the Great Recession. However, Pfizer has increased its dividend every year since 2009.

Pfizer faces some challenges with sales declining for drugs that have either lost exclusivity, or soon will do so. The company could even lose its position as the No. 1 drugmaker in terms of prescription drug sales, by 2022. Retired investors shouldn't be too concerned, however.

The company still has plenty of potential. Pfizer's Ibrance is on track to generate annual revenue of $7 billion within the next few years. Solid sales momentum continues for anticoagulant Eliquis and autoimmune disease drug Xeljanz. Pfizer also has great expectations for atopic dermatitis drug Eucrisa and prostate cancer drug Xtandi, both of which were gained as a result of acquisitions.

Pfizer's pipeline should also drive earnings growth in the future. The company has 32 programs in late-stage development and another 17 in phase 2 clinical testing. I expect Pfizer to keep up its tradition of making acquisitions to fuel growth, as well.

This big pharma stock has been a favorite of retirees for a long time. I think it still deserves a spot in retirees' portfolios.