Eye-popping returns happen all the time in the stock market, and they aren't limited to the most exciting or revolutionary businesses, either.

One common misconception about investing is that market-thumping returns require big risks, like buying high-growth companies in emerging fields. That might be true if you're looking for a small chance at doubling your money in, say, a few months.

Long-term investing provides a much steadier path toward massive gains, though. Royal Caribbean (RCL -7.19%), Tyson Foods (TSN -0.13%), and Pegasystems (PEGA -1.89%), for example, are all large, well-established companies. If you'd bought them five years ago, you'd have earned returns of 300% or better compared to the broader market's 75% gain. 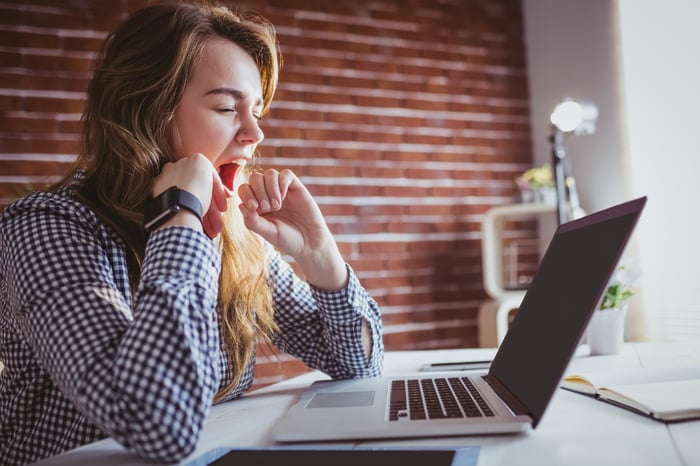 Tyson Foods' business has enjoyed soaring profits lately. Operating income spiked by 52% in 2015, and then by a further 31% last year. That means operating earnings now have doubled in just two years.

Some of this improvement was due to factors outside of management's control, including the swinging supply of beef livestock. But the company has made its own luck, too, by sharply reducing its costs and expanding aggressively into prepared foods. Its 2014 purchase of Hillshire Farm has helped that segment become far more profitable by saving roughly $600 million over the past two years.

Tyson executives believe Hillshire will help it achieve a further $675 million in synergies this year. That bright outlook, plus booming results in the beef segment, should help the meat giant set more sales records this year, even as its profit margin continues rising despite having doubled since 2015. 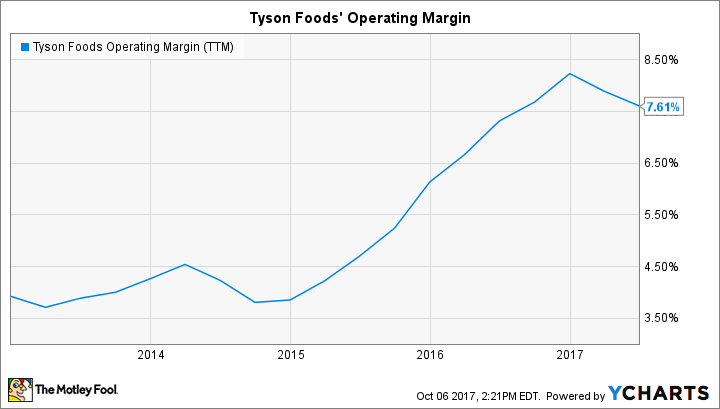 Business-management software-specialist Pegasystems has made big improvements to its business by shifting away from perpetual licenses and toward term-based and cloud licenses. The strategy comes with some significant drawbacks, including weaker sales growth, because what would have been upfront revenue now gets booked over a period of many years.

In exchange, Pegasystems' revenue stream has become steadier and more predictable. Recurring revenue, after all, is up to 54% of the business from 51% in early 2015.

That boost is giving management confidence as they plot out their market strategy against larger CRM rivals. Investors are hopeful that improvements coming to its platform, including the addition of robotics and artificial-intelligence capabilities, will help the company stand out in a crowded field. In any case, CEO Ken Stillwell and his executive team plan to steadily boost profitability this year, while also investing in building out their marketing and sales capabilities.

The cruise-ship industry has enjoyed healthy growth over the past few years, with passenger counts rising to 24 million last year from 21 million in 2012. But Royal Caribbean, as the leading operator, has taken more than its fair share of those gains.

It handled 5.7 million passengers last year, or 19% more than in 2012. That robust demand also allowed the company to raise prices. As a result, adjusted net income has tripled in the past five years, to $1.3 billion. Peer Carnival, meanwhile, has managed much more modest growth. 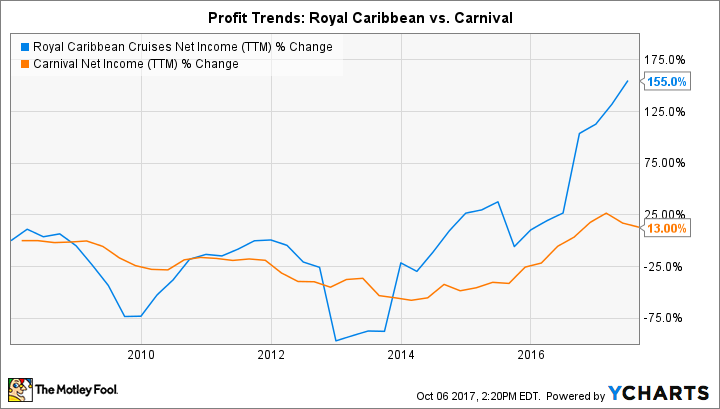 Strong booking trends allowed CEO Richard Fain and his executive team to raise their full-year profit outlook in early August. They now see adjusted earnings rising to at least $7.35 per share, more than doubling the result from just three years ago. Royal Caribbean's return on invested capital is also slated to roughly double in a three-year period to pass 10% sometime in 2018.

These stock examples span different industries and business models, so there isn't much from their stories that investors can apply directly to finding the market's next big winners. But they demonstrate that impressive returns can come from large, established stocks -- assuming you measure your investing time horizon in years as opposed to months.