This prediction from billionaire Bill Gates is why Netflix will continue its strong leadership in the video-streaming industry.

Things have changed. Aside from the fact that Netflix bankrupted Blockbuster, concerns about streaming video delivery have now given way to concerns that Netflix will upend the traditional subscription television business model. Now instead of skepticism, Netflix has challengers: A recent report from app-focused website App Annie finds Netflix is facing increased competition on its home turf. However, a 20-year memo from Microsoft billionaire Bill Gates shows how Netflix will continue to expand its considerable lead in this industry. 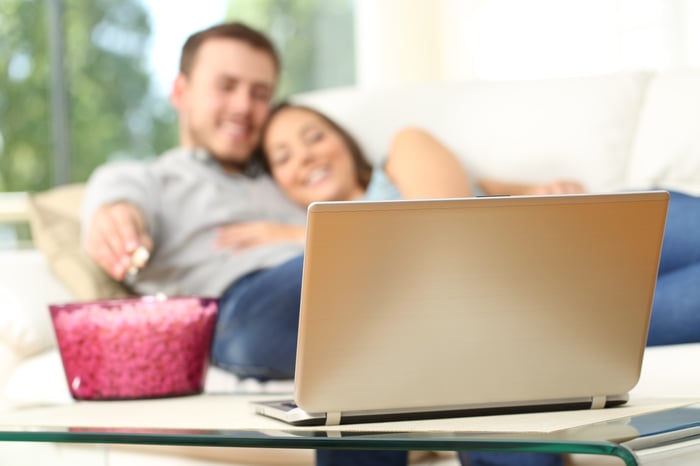 The streaming-video space is getting more contested

According to App Annie, video streaming apps are taking over. According to the recent 2018 predictions:

2017 has been another extraordinary year for video streaming services, as they continue to capture large audiences and receive critical acclaim for their original studio content. Year to date through Oct. 31, 2017, these apps have driven significant growth of worldwide consumer spend for the entertainment category on both iOS and Google Play. This is an increase of over 85% and over 70%, respectively, compared to the same time period in 2016.

In addition, the space appears increasingly fragmented. Among U.S. iPhone video streaming users, more than 31% have four or more streaming video apps on their phone, compared with 25% last year. In 2016, 38% of video-streaming users had only one such app on their phone; that figure dropped to 33% this year.

Look for both trends to continue. During its fourth-quarter fiscal earnings announcement, The Walt Disney Company (DIS -1.31%) CEO Bob Iger announced the company's intentions to bring not one, but two streaming video services to market -- one sports-focused to augment its ESPN property and the other a Disney-branded service -- which are slated to launch in 2018 and 2019, respectively.

Content will continue to be king, and that favors Netflix

In 1996, Microsoft (MSFT -1.32%) CEO Bill Gates penned an essay titled "Content Is King." In his missive, the CEO announced the creation of MSNBC, Microsoft's partnership with NBC, while noting, "Content is where I expect much of the real money will be made on the Internet, just as it was in broadcasting."

Many streaming-video providers -- particularly providers such as CBS All Access and Hulu -- view their apps as a way to augment (or even worse, competition with) its subscription-television business. As a result, only a minuscule portion of content from these competitors is exclusive to the streaming-video format.

Netflix faces increasing pressure from tech-focused entrants Amazon.com (AMZN -2.49%) and Apple (AAPL -1.80%), which that are ramping up their content budgets, with the former estimated to spend $4.5 billion in 2017 and the latter announcing it will spend $1 billion in 2018. However, Amazon considers its video a way to bring value to current Prime subscribers. Apple hasn't formally announced how it would monetize its content, but its first foray, Carpool Karaoke, was used to induce users to buy its subscription-based Apple Music.

Broadly, it appears Netflix is the only streaming-video provider with a primary focus on producing and monetizing exclusive, streaming-based content. This year, the company will spend $6 billion on overall content, increasing its original, exclusive content hours from 320 in 2005 to 1,000. This strategy has allowed Netflix to own this industry, and it will continue to do so.

It's often said that imitation is considered the strongest form of flattery. What these new entrants show is Netflix has a strong, highly scalable business model. Look for the company to continue to grow by leveraging its exclusive content, even in a more competitive industry.