Please ensure Javascript is enabled for purposes of website accessibility
Log In Help Join The Motley Fool
Free Article Join Over 1 Million Premium Members And Get More In-Depth Stock Guidance and Research
By Lee Samaha - Dec 12, 2017 at 7:02AM

Issues in GE's power segment mean the company has a challenging near-term outlook, but its industrial peer looks set for growth.

The dramatic 44% fall of General Electric's (GE -1.02%) share price this year is undoubtedly starting to tempt value investors into the stock. But on a risk/reward basis, I think Honeywell International (HON -0.81%) -- up nearly 32% over the same period -- remains the more attractive investment. Here's why. 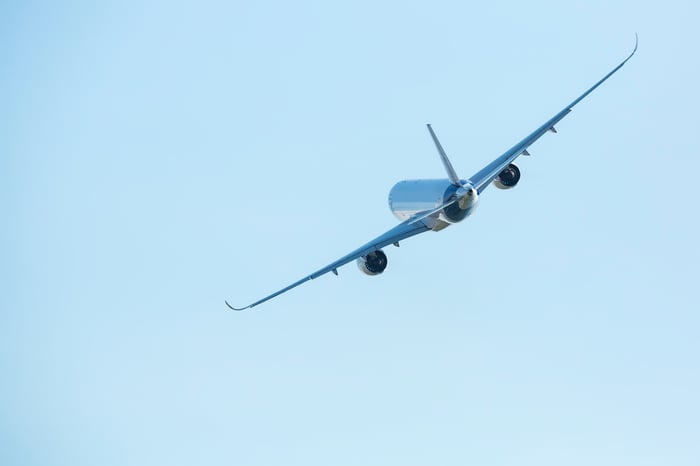 Aerospace is a key growth driver for both companies. Image source: Getty Images

The power segment was a the center of GE's difficulties in 2017, and CEO John Flannery is determined to make the changes that will improve the unit's execution. That's all well and good, but GE Power's problems may actually turn out to be structural in nature, and management might not be able to do much about them.

In a nutshell, the growth of renewable energy for electricity generation, -- and the decreasing cost of the energy grid storage that makes renewables more attractive by allowing them to provide consistent supplies of energy -- threatens some of GE's revenue streams. For example, demand for smaller gas turbine equipment and services is likely to decline, particularly for use cases where they would have supplied power to support peak load demands -- something renewable sources are able to do well.

GE's management is aware of these issues -- indeed, GE is actually a leading player in renewable energy and energy grid storage -- but understanding the nature of a problem doesn't necessarily mean it's solvable.

Ultimately, GE expects to ship 65 to 75 heavy-duty gas turbine units in 2018, down from 95 to 105 in 2017. In addition, GE forecasts it will ship 40 to 50 units of its advanced gas path solution (which helps increase turbine capacity and efficiency) , down from the 80 to 90 it will sell in 2017. GE started this year expecting 160 shipments. Clearly, demand is deteriorating.

By contrast, Honeywell faces no significant structural threats. Its aviation segment (in common with GE Aviation) is exposed to positive long-term trends -- Boeing and Airbus have lengthy order books, and revenue passenger kilometers continue to grow at a 7%-plus clip. Meanwhile, Honeywell's home technologies, performance materials and safety solutions give it good exposure to long-term themes such as energy efficiency, urbanization, and safety in the workplace.

Both companies have come under pressure from activist investors to restructure so as to maximize value for shareholders, but the difference is that Honeywell is making those changes from a position of strength. For example, back in October, it announced plans to spin off two businesses -- transportation systems and its home and global distribution business -- by the end of 2018.

Management's rationale is that the two businesses would be better run as independent entities, and given Honeywell's strong performance this year, it's likely to get a good price for them.

In contrast, the agreement GE announced in September to sell its industrial solutions business to ABB was a sign of the problems to come. GE was generating just 6% earnings before interest, tax and amortization (EBITA) margin out of the business -- a figure notably lower than that of its peers. Consequently, GE agreed to sell the business for less than its annual sales, which left observers questioning whether management was really doing a good job of maximizing value for investors.

Moreover, GE's plan to exit its transportation and lighting businesses may well be necessary in order to support its new dividend payout, given that its FCF generation will be pressured until management turns around performance in the power segment.

It's no secret that GE's deteriorating free-cash-flow generation is the main reason behind its stock price decline and its dividend cuts, and management's plans for the next few years are hardly inspiring. For example, GE expects industrial FCF excluding deal taxes and pensions to be just $3 billion in 2017, down from $8.9 billion in 2016.

It's true management expects FCF to rebound to the $6 billion to $7 billion range next year, but recall that GE will be funding its pension obligations to the tune of $6 billion in 2018. This figure includes its obligations for 2019 and 2020, so for argument's sake, let's assume GE needs to pay $2 billion into its pension funds in 2018. Subtracting that from industrial FCF excluding deal taxes and pensions means just $4 billion to $5 billion in FCF.

But here's the thing. Honeywell expects $4.6 billion to $4.7 billion in FCF in 2017 alone. Moreover, at the midpoints of guidance for earnings and FCF, its FCF conversion from net income would be around 90%. Honeywell expects conversion to improve to a run rate of 100% by the end of 2018. Given that analysts expect Honeywell's earnings to improve by nearly 10% in 2018, it's not hard to see Honeywell's FCF hitting a run rate of $5.7 billion in 2018.

Now, assuming GE's FCF is $4.5 billion in 2018 and comparing that with, say Honeywell's $5.4 billion (assuming 95% conversion through 2018) and recalling that GE's current enterprise value of $234 billion is nearly 1.9 times Honeywell's $126 billion, it's not hard to see that Honeywell is a much cheaper stock on a FCF basis.

All told, Honeywell is the more attractive stock on a risk/reward basis and also on an absolute value basis. GE has plenty of issues to deal with in its power segment, while Honeywell has been quietly improving execution in all of its business units.