The sparkling-water company could transform the way wine is consumed.

Like Lazarus being raised from the dead, SodaStream International (SODA) was able to come back to life by transforming itself from a soda company to a sparkling-water business. Against all odds, its stock price has quintupled in value in only 1 1/2 years. Its next miracle may be accelerating sales growth even further by turning water into sparkling wine. 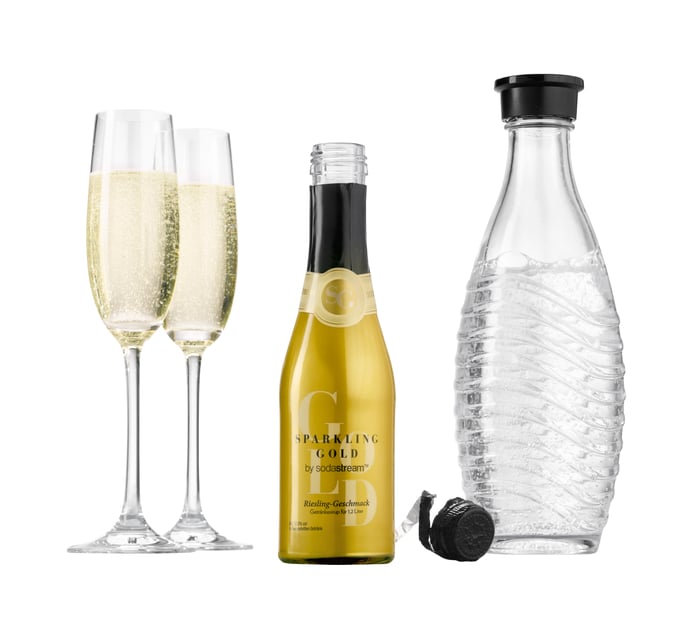 All that sparkles is gold

SodaStream has released an alcoholic syrup that will allow users to make sparkling wine at home. Called Sparkling Gold, the sparkling-water company says that mixing one part of the syrup with five parts water from its countertop appliance will result in 12 glasses of sparkling wine with 10% alcohol by volume, which has been said to taste like a Riesling. (If you want a bigger kick, use less water.)

It seemingly would have huge potential considering the continued popularity of wine. Market analysts expect the global wine industry to grow at a compounded rate of 6% a year for the next five years as urbanization, rising incomes, and youthful willingness to experiment with different drinks pushes consumption higher.

The U.S., which is the biggest market for wine, and China, which is expected to surpass the U.K. to takeover the No. 2 spot by 2020, are seen as the primary countries driving the industry higher.

However, the limited edition Sparkling Gold is currently only available online in Germany, which, according to the Wine Institute, is the fourth-largest market in terms of wine consumption, with about an 8% share. But it's the world's largest importer of wine because local production falls far short of demand, so it imports some 16 million hectoliters annually.

This could explain why SodaStream introduced it there first. Germany has a well-developed wine market, and sparkling wines account for around 17% of the total per-capita consumption. Germany also happens to be one of SodaStream's best-performing markets.

Western Europe accounts for over 60% of SodaStream International's revenues, about twice the amount it recognizes from the Americas, and third-quarter sales were up 13.5% for the period, primarily because of a strong performance in Germany.

Undoubtedly, this is just a test at the moment and SodaStream will introduce it to more markets if it's successful, but it's unclear whether it will make it into the U.S. Germany reportedly has some of the least restrictive laws regarding alcohol sales, while the U.S. is comparatively more restrictive. The Alcohol & Tobacco Tax & Trade Bureau must evaluate the ingredients and production process for certain wines, and in some cases, it also conducts laboratory analyses of the product in conjunction with reviewing the formula. It may be a level of hoop jumping that SodaStream isn't willing to go through, even if it might be worth it.

As noted before, the U.S. is leading global wine consumption, and Constellation Brands (STZ 1.02%), the world's leading premium wine distributor with brands like Robert Mondavi and Meiomi, recently reported the U.S. wine market provides consistent 3% volume growth and 5% dollar growth annually. For a more accessible wine such as SodaStream's represents, the potential could be much larger.

If SodaStream was able to get into China's growing market, however, that might make up for any potential inability to get it online here. SodaStream's Asia-Pacific market saw sales surge 34% in the third quarter. With growth rates like that, it's possible it could soon overtake the Americas in becoming SodaStream's second-largest market.

It might take a miracle to get the sparkling wine concentrate here in the U.S., but SodaStream International has proven fairly adept at overcoming high hurdles before. Even if it's not able to reach our shores, other global markets could be open to it, and that could make the sparkling-water company's stock even more bubbly.