Do you love using Snap's (NYSE:SNAP) Snapchat with your friends? Are you on the wait-list for a Tesla (NASDAQ:TSLA) Model 3? Are you a music fanatic addicted to your Spotify playlist?

Would you love to own shares in all of these exciting companies, but are holding back because Snapchat trades at a huge 26 price-to-sales multiple, Tesla continues to spend tons of cash it doesn't have, and Spotify is still private?

If that's the case, you may want to look at Tencent (OTC:TCEHY) -- my favorite Chinese stock, and a company every investor needs to know -- as it owns stakes in all three companies. 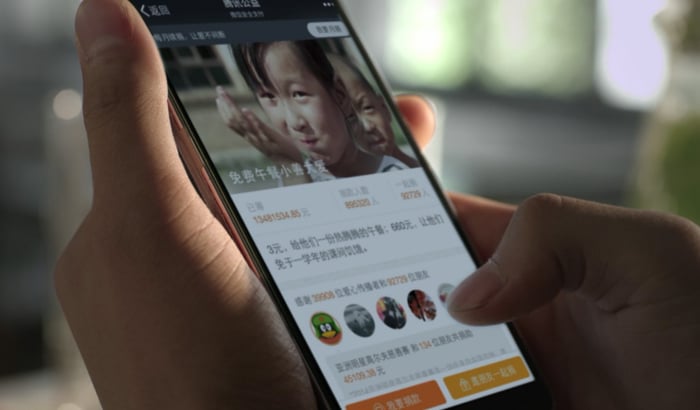 Tencent is the fifth-largest company in the world by market cap. The company's core product, I would say, is its WeChat platform. WeChat is the dominant social media platform in China, with nearly 1 billion monthly active users. Users reportedly open the app an average of 10 times a day and spend over an hour per day on WeChat, with one-third spending over four hours per day on the app.

Users can use WeChat to messages friends, make videos, meet new people, engage with coworkers, shop online, make cashless payments, pay bills online, and much more. It is basically China's portal to all things on the internet.

A core competency of Tencent is its investment prowess. In fact, its huge gaming segment came courtesy of its 2011 acquisition of U.S. game studio Riot Games. This year it put money into Tesla, Snapchat, and Spotify.

Tesla is an exciting company, but one of the drawbacks to investing in Tesla is that the company is burning through cash as it ramps up Model 3 production and its gigafactory. Tencent sees promise, though, investing $1.7 billion this past March for about a 5% stake. That price equated to about $210 per share, so Tencent is already up 50% on its investment! Of the Tesla investment, Tencent management said [transcript via Seeking Alpha]:

That automobile is becoming a smart device and there will be much more connection between the physical world and the virtual world. So that's the reason we felt we want to partner with the leading company in such field right now in order for us to get on with these capability as well as to figure out whether we can learn something new or whether we can actually build some businesses together.

Tencent was an early investor in Snap, investing in a private fundraising round in 2013. Snap went public in early 2017. After Snap's stock plunged after its third-quarter earnings report in November, it was revealed that Tencent had bought 12% of the company. The company did not reveal what it paid for the shares.

The Snapchat purchase not only shows confidence in the beleaguered app, whose stock now sits below its IPO price, but could also allow Tencent to market its games to Snapchat's 173 million active users. After all, Tencent just released Strike of Kings, an English-language version of Honour of Kings aimed at Western audiences.

In early December, Tencent announced a deal in which it is swapping 10% of its Tencent Music subsidiary for 10% of Spotify. Both companies are potentially going public soon, and the strategic tie-up could boost the prospects of each. For instance, the companies could possibly share data and advertise across both markets. Combined scale could also lead to greater leverage with music labels.

Apple Music chief Jimmy Iovine recently said it may be difficult for Spotify to become profitable as a stand-alone streaming app, despite recently passing 60 million users. It appears Spotify realized scale is one of the tools it can use to boost profitability, and the Tencent Music tie-up fits the bill.

Tencent has reportedly invested $3.5 billion in 41 tech start-ups since 2011. By owning shares of Tencent, you own stakes in all of these businesses, as well as the dominant internet platform in China. I like that setup better than owning Snapchat or Tesla outright.

Of course, if a company as skillful as Tencent is investing in Tesla, Snapchat, and Spotify, those with a bigger risk appetite may want to give those companies a look. There's obviously something there.