Please ensure Javascript is enabled for purposes of website accessibility
Log In Help Join The Motley Fool
Free Article Join Over 1 Million Premium Members And Get More In-Depth Stock Guidance and Research
By Billy Duberstein - Updated Feb 2, 2018 at 8:08AM

Tiffany Haddish is having a moment in Hollywood right now, and she'll be putting her love of Groupon to work for the company in a Super Bowl ad.

Sometimes the stars align for a company, literally and figuratively. The combo of both hard work and a bit of good luck seems to have benefited Groupon (GRPN -5.88%) recently, as the company scored a huge piece of free advertising, courtesy of Tiffany Haddish.

Haddish was one of the stars of 2017 comedy hit Girls Trip, which took in $140 million at the box office with a production budget of $19 million and got an 80% audience rating on Rotten Tomatoes. Haddish "stole the movie," according to Rolling Stone. Not only was her performance a hit, but her subsequent late-night comedy promotional appearances were popcorn-worthy as well.

In particular, during an appearance on Jimmy Kimmel Live, Haddish told a hilarious seven-minute story about taking Will Smith and Jada Pinkett Smith on a Groupon swamp tour in Louisiana. The clip has been viewed over 3 million times on YouTube.

Groupon immediately pounced, making her the company's official spokeswoman, and it will feature Haddish in a Super Bowl ad this weekend that encourages people to spend money locally. Here's why this confluence of events should have Groupon shareholders smiling. 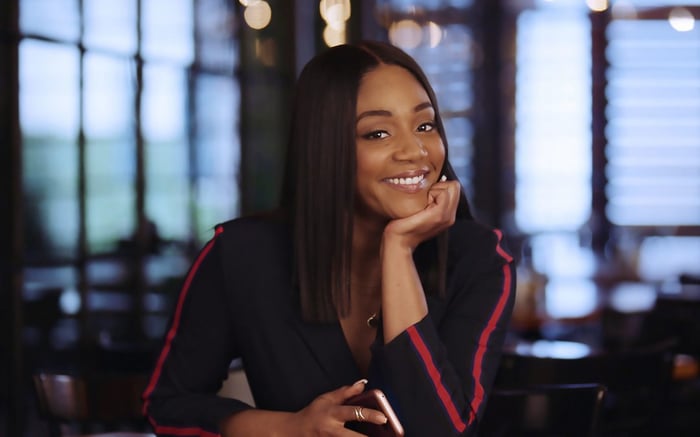 Haddish may have started out advertising Groupon accidentally and for free, but the company has now put some serious money behind her. Super Bowl ad time is the most expensive television ad time there is, with commercials -- often pricey spectacles by companies looking to make a big impression -- gaining almost as much attention as the game itself. Groupon's upcoming ad will air during the fourth quarter on Feb. 4, but you can preview the ad online here.

And while celebrities often advertise products, rarely does it come together as authentically as it did here. According to the company's press release, "Tiffany ranks in the top 1 percent of most frequent Groupon purchasers and has literally saved thousands of dollars as a Groupon customer." The message behind the ad conveys the virtues of supporting local businesses, at the expense of an evil corporate titan trying to put local family-owned operations out of business -- before Haddish gets her revenge with the help of a couple of football players.

Can Haddish pull an Oprah?

While not a guarantee of success, the endorsement of a big celebrity, if perceived as authentic, can potentially move the needle, especially for a small company. For instance, consider the impact Oprah Winfrey had on Weight Watchers International (WW -4.49%).

Winfrey, a former spokeswoman for the company, invested $43 million for a 10% stake in the company in late 2015 (with options for another 5%), after Weight Watchers stock had plummeted on concerns over competition. In addition, Winfrey got a seat on the board of directors, and became an active advisor and spokeswoman.

How did that work out? Quite well -- Weight Watchers stock is worth nearly 10 times what it had been: 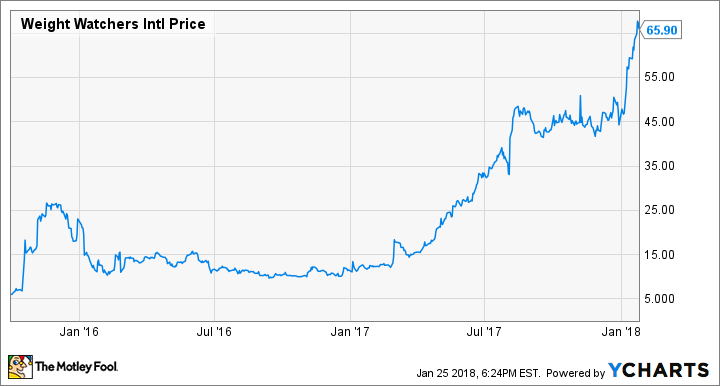 To be clear: I don't think Haddish is going to propel Groupon to these sorts of gains. It's not the same people or the same scale. Haddish, while on the rise, doesn't have the clout of Winfrey, and Winfrey also invested a huge amount of money herself. At the time Winfrey invested in Weight Watchers, the company was also only about 15% the size of Groupon today.

Still, I think Haddish's endorsement could actually make a difference -- perhaps more than the average celebrity endorsement. This is because the marketing boost is coming just as Groupon is making a meaningful change to its core product, with last year's introduction of Groupon+.

Groupon+ allows customers to seamlessly link Groupon deals to their credit card, thereby making Groupon easier to use. The feature could potentially mark a new chapter for the company, which has struggled mightily since its 2011 IPO.

Groupon+ is just being rolled out now, having reached 23 cities as of the third quarter 2017, but has been advertised significantly in only three cities, according to management. With the momentum of Haddish's Super Bowl ad, it's possible the company could accelerate its marketing efforts around Groupon+ in 2018.

As Groupon is still a relatively small company at $3 billion market cap, the combined effect of a big marketing push around a new product has the potential to move the needle for the company in the year ahead.