Yes, it could happen to you -- these two popular companies have increased their market values more than 30-fold over time.

In these days of turbulent markets, it can be easy to lose sight of the fact that stocks are still one of the best asset classes available. Many studies have shown that, over time, they outperform nearly every other type of popular investment.

And some stocks really outperform. Even with the recent market turmoil, these two winners have put a lot of money in the pockets of their more patient investors, and both are well-known names in their respective sectors. 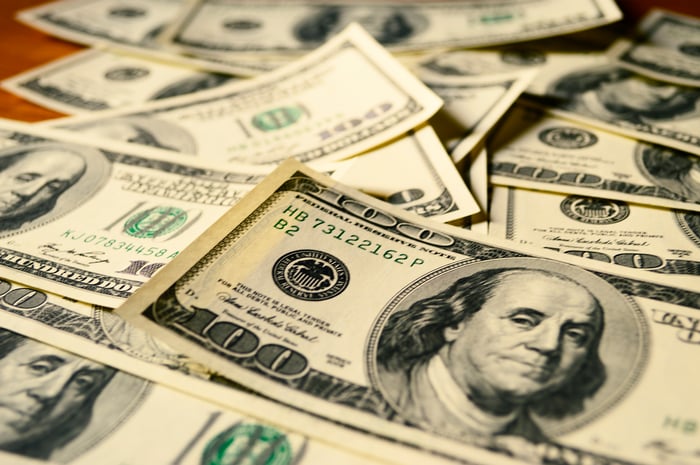 Star stock picker Warren Buffett needs almost no introduction to the investment community; ditto for his monster holding company Berkshire Hathaway (BRK.A 2.10%)(BRK.B 2.12%). Berkshire has big stakes in many of the market's blue chips, including Bank of America, American Express, Apple, and General Motors, to name only a few. It also holds chunks of smaller issues that have popped nicely, and owns a clutch of successful private companies.

Buffett is a model buy-and-hold investor. Some of Berkshire's top picks haven't just been in the portfolio for years, they've occupied space for decades -- American Express is a banner example (Buffett first loaded up on the stock more than 50 years ago). With that kind of patience, Berkshire and its shareholders have been more than handsomely rewarded.

Taking "only" the last two decades or so into account, the company's equity portfolio had a market value of slightly under $22.6 billion at the end of 1995. Fast-forward to today and the portfolio (as of September 30 last year, anyway) now stands at almost $186 billion.

That's a nearly nine-fold increase across a not very wide stretch of time. Plus, that latter figure comes in the wake of the market's recent see-saw, and just after Berkshire's top holding -- troubled bank Wells Fargo -- got slapped with a harsh set of sanctions following several instances of malfeasance.

These days, despite the developments with Wells Fargo and the clunky performance of a few of its other investments, Berkshire's stock is as popular as its leader is adored. Its share price has ballooned even more than the value of its portfolio; Buffett-ish buy and hold types that plonked down $3,000 for one of the company's A shares in the mid-1980s are now sitting on top of nearly $300,000.

Starbucks (SBUX 2.98%) has become such a ubiquitous facet of American life that many of us visit our local outlet on a daily basis. Not so long ago, the standard American takeout coffee was a cheap cup of filtered drip. Now, thanks to Starbucks, we often start our days with $3.50 lattes.

The company's stores are seemingly everywhere in busy cities like New York. This is due, in no small part, to Starbucks' heavy concentration on centralized ownership. With the classic franchise model of operation, a franchisee was guaranteed a certain radius of exclusivity. By owning and operating its own stores, Starbucks can build as many of its outlets as the market will bear, at whatever density it chooses.

That's one reason why the company has such a presence in the U.S. It's prominent abroad too, although it's had to fight hard in certain markets with longer-established coffee cultures, such as Europe.

Still, this combination of wild popularity (at least Stateside) and aggressive expansion -- plus the very occasional acquisition -- has been very good for the company's finances. Over the past five fiscal years alone, Starbucks has managed to raise its revenue by an impressive 50%-plus. For such a sprawling global operation it controls costs pretty well, and has lately managed to deliver annual net margins of around 13%.

The company's stock price has seen a caffeine-fueled rise since the Great Recession. Reaching back further to the takeoff of this country's Cappucino Culture in the mid 1990s, a Starbucks share that sold at less than $1.50 per share is worth nearly $56 today.

Although these two companies are outliers, they aren't unique -- and that's the amazing thing about the stock market. It gives us a solid chance at owning a tiny piece of businesses that are about to explode in value. Examples of this abound; take a look at this trio of millionaire makers, this set of four-baggers, or another group of $3,000 to $100,000-plus winners.

Now’s the Time to Buy These Stocks

3 Stocks You Can Set and Forget