However, home furnishings demand is increasing, thanks to the strengthening housing market. Meanwhile, upscale department stores are facing sales and margin pressure in apparel and accessories, as the rise of e-commerce has increased pricing transparency and competition.

As a result, Nordstrom seems to be getting more serious about home furnishings. Just in the first few months of 2018, Nordstrom has made some notable moves to expand its home business.

Bloomingdale's is the upscale home king

A typical Nordstrom store has a very modest home section. For example, in the company's Walnut Creek, California, store (pictured below), the "Nordstrom at Home" section occupies a tiny corner of the third floor. I missed it the first time I walked by! It contains an eclectic -- and small -- collection of goods, including bedding, towels, throw pillows, candles, and kitchen items. 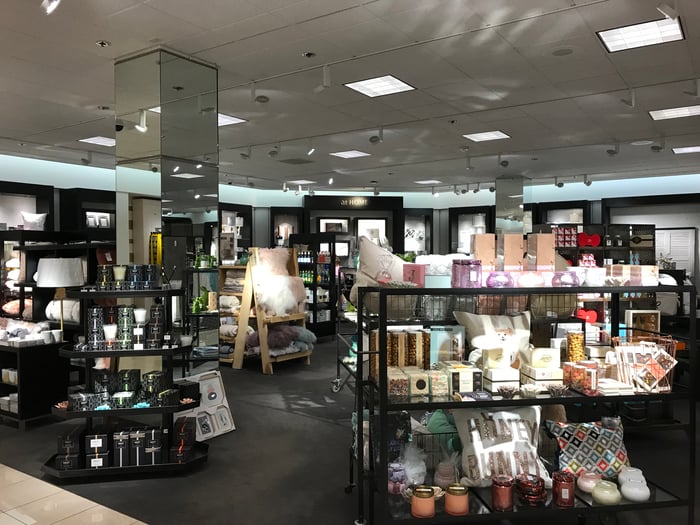 By contrast, Bloomingdale's has a full home department in most of its stores, with up to 65,000 square feet of selling space. It also operates a handful of home- or furniture-only locations, similar to sister chain Macy's.

Bloomingdale's carries a broad assortment of linens, kitchen and dining items, home decor, furniture, and mattresses in its home departments. Its home business is inventory-intensive but highly profitable nonetheless, because of Bloomingdale's clear leadership in this category.

Nordstrom will invest more in its home sections

It's unlikely that Nordstrom will ever try to challenge Bloomingdale's position in high-end home furnishings. That said, the upscale retailer clearly sees opportunities to grow in the home market by expanding and differentiating its offerings.

Last month, Nordstrom announced that its Treasure & Bond private brand -- which donates 2.5% of its sales to charity -- would launch a home collection in 2018. "The home collection will feature a fresh tabletop assortment including ceramic dishware, artisanal cheese boards, and textured glass pieces, as well as bedding, stylish throws, and pillows," according to the company. Pricing will be quite affordable, with items costing $45-$199. 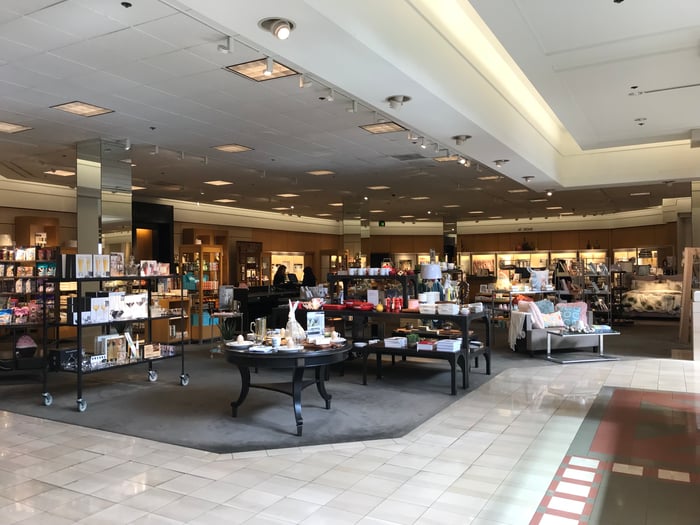 Nordstrom Arden Fair is one of 15 stores that will sell the Anthropologie Home collection. Image source: author.

This collection will cover a similar range of merchandise as the new Treasure & Bond home line, but with more creative and whimsical designs. Importantly, Anthropologie will regularly update its home collection at Nordstrom, which should keep customers interested.

Finally, Nordstrom is adding some star power to its home sections in 2018. Popular designer Tory Burch recently confirmed that Nordstrom will begin selling her home decor collection later this year.

Small steps in the right direction

An expansion of its home furnishings offerings may help Nordstrom bolster its sales. If the upscale retailer can draw just a few more shoppers into its stores each day and get them to make purchases while they're there, its home buildup would be a big success.