Memorial Day weekend marks the one-year anniversary of two major additions to the Central Florida tourism landscape. Comcast's (NASDAQ:CMCSA) Universal Orlando debuted Volcano Bay, a high-tech waterpark that Universal was so impressed with that it christened it as its third theme park. Disney (NYSE:DIS) introduced Pandora -- The World of Avatar, a 12-acre expansion to Disney's Animal Kingdom.

Things are much quieter this time around. Universal's biggest 2018 addition opened several weeks ago, and reviews for Fast & Furious Supercharged have been largely negative. Disney's major Florida debut won't open until late next month, as Toy Story Land is sticking with its June 30 opening date. Disney and Comcast may be playing up their additions, but that's the well-oiled marketing teams in action. Both of the country's largest theme park operators are phoning it in this year relative to last year's debutantes and what's in the pipeline for 2019. Every year can't be a head-turning winner. 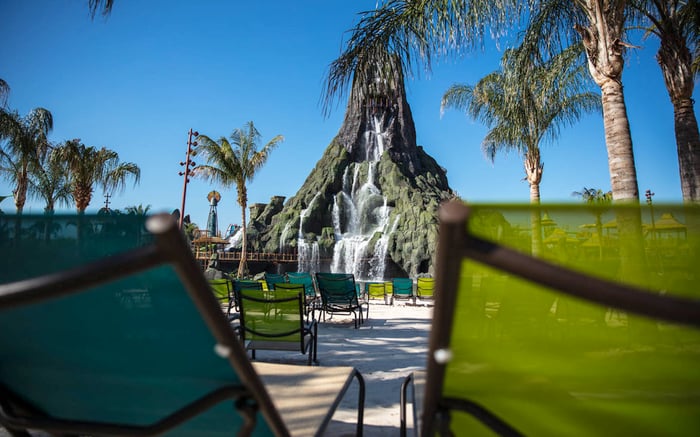 Last year's expansion efforts paid off, though often at the expense of the theme park operator's other attractions. The Avatar-themed expansion at Disney World resulted in a 15.3% spike in attendance at Disney's Animal Kingdom, according to Themed Entertainment Association. However, Disney's three other parks clocked in with ho-hum growth. The 4.2% increase at Epcot is decent, but Magic Kingdom's 0.3% uptick and an actual 0.5% decrease at Disney's Hollywood Studios proves that a rising banshee doesn't lift all of Mickey Mouse's gated attractions.

Things weren't materially better at Comcast's Universal Orlando. Volcano Bay attracted 1.5 million guests despite being open for a little more than seven months last year, a welcome upgrade to the 1.3 million guests it welcomed to Wet 'n Wild before closing it down at the end of 2016. However, turnstile clicks at Universal Studios Florida and Islands of Adventure rose 2%. Tack on the 200,000 additional guests that Volcano Bay entertained relative to Wet 'n Wild and overall attendance still rose by just 3%, the resort's weakest growth since just before the game-changing addition of The Wizarding World of Harry Potter in 2010.

It's not fair to call 2017 a failure. Disney and Comcast rolled out another year of ticket price hikes in February, so folks spent more to get in last year. Ticket prices for Volcano Bay were also markedly higher than a day at Wet 'n Wild. However, the real point of talking down last year's theme park magnetism is that if major attractions didn't see either resort increase overall attendance by more 4% in 2017, it will be hard to expect more out of the industry in 2018 when the new experiences just aren't as likely to move the needle.

Pixar fans will argue that Toy Story Land will be bigger than Pandora -- The World of Avatar, but they will probably lose that debate. Toy Story Land is already opening five weeks later into the peak summer travel season, so its impact will be limited to Disney's fiscal fourth quarter. The Toy Story franchise may be more beloved than Avatar, but last year's expansion at Disney's Animal Kingdom introduced two one-of-a-kind ride experiences to the resort. Toy Story Land will be adding just a pair of highly themed kid-friendly carnival rides.

Disney and Comcast investors may also want to consider that diehard fans know that better attractions are coming in 2019. It may make sense for travelers to hold off until a new Potter-themed family coaster opens at Islands of Adventure next year and Star Wars: Galaxy's Edge comes to Disney's Hollywood Studios in late fall of 2019.