Shares of GameStop (NYSE:GME) were halted briefly on Monday, only to spike higher after Reuters reported that the video game retailer has hired a financial advisor to assist in discussions that it's been having with private equity firms interested in a potential buyout.

Reuters singles out one firm -- Sycamore Partners -- as an interested suitor. Sycamore has a knack for bottom feeding when it comes to out-of-favor retailers. It has bought out or taken sizable stakes in Talbots, Anne Klein, Hot Topic, and Nine West. GameStop would seem to fit the mold of the firm's penchant for mall laggards, though video games are a far cry from apparel and footwear.

GameStop investors better hope that if a serious buyout offer does present itself that the retailer gets injected with a heavy dose of humility. Hopefully, it reflects on the sad fate of Circuit City when it dismissed buyout offers just before it started circling the drain. 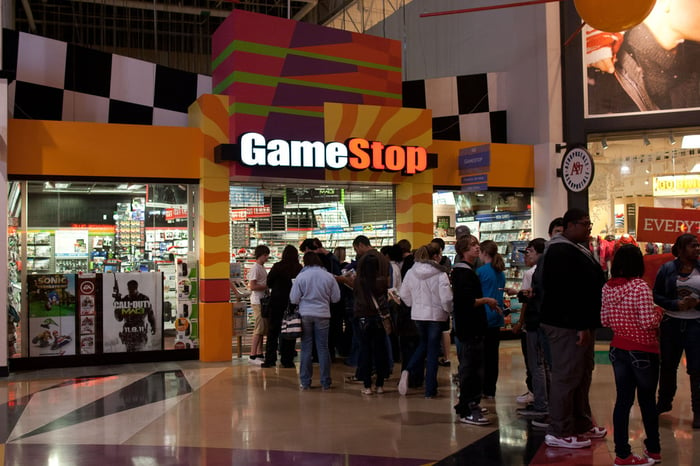 It may not be just shoppers lining up at GameStop these days. Image source: GameStop.

There are lessons to be learned in the fall from grace at Circuit City. It rebuffed a pair of offers, and while turning down a proposal to acquire the big-box consumer electronics chain at $8 a share in 2003 may seem forgivable, rejecting a deal and $17 a share in 2005 was a travesty to shareholders. Investors walked away with $0 a share when Circuit City liquidated itself in bankruptcy a couple of years later.

GameStop bulls will argue that the small-box chain is not Circuit City. GameStop is profitable, with a great business model given its sales per square feet, low number of employees per store, and the reasonable rent available in cheap strip mall parcels. GameStop right now is a money tree, spitting out enough cash that it can both shell out a beefy dividend and aggressively repurchase its cascading shares.

However, deep down inside, GameStop knows that it's on borrowed time. Circuit City -- when it scoffed at a $17 buyout offer 13 years ago, which coincidentally was around the time that GameStop shares traded as low as they are right now -- was a beast. Circuit City was profitable, gobbling up its own stock through buybacks, and paid a small dividend. It ignored the signs that there was going to be a shakeout in consumer electronics in a future where competing with online retailers with lean cost structures would be a bear.

GameStop's bear comes in the form of the way that video game publishers and console makers are delivering content digitally. Physical distribution is fading, and that's why GameStop's sales are starting to meander and its high-margin resale business is losing steam.

If GameStop can be saved, it will be behind the curtain of a private equity firm that doesn't have to live up to quarterly expectations. Sycamore Partners or any other firm up for the challenge can try to keep GameStop relevant without having to shell out quarterly dividends or spend money on buybacks in a thinly veiled attempt to prop up profits on a per-share basis. It doesn't surprise me that GameStop has potential suitors, but it also won't surprise me if it walks away without a deal and keeps fading. If GameStop has a chance to avoid Circuit City's mistake, it better not blink.