AT&T (NYSE:T) recently took a stake in Magic Leap, an augmented reality start-up that was valued at $6.3 billion after its last funding round in March. AT&T didn't disclose the size of its investment, but it gives the telco an exclusive distribution deal for the company's Magic Leap One AR glasses when they launch this summer.

AT&T Communications CEO John Donovan stated in a press release that the deal will pair the telco's "pioneering technologies, unmatched network, content platform, and vast customer ecosystem with Magic Leap's efforts to build the next generation of computing." Donovan has "observer fights' with Magic Leap's board, according to AT&T. Magic Leap CEO Rony Abovitz was quoted as saying, "Coupling the strength of the evolving AT&T network with Magic Leap's spatial computing platform can transform computing experiences for people." 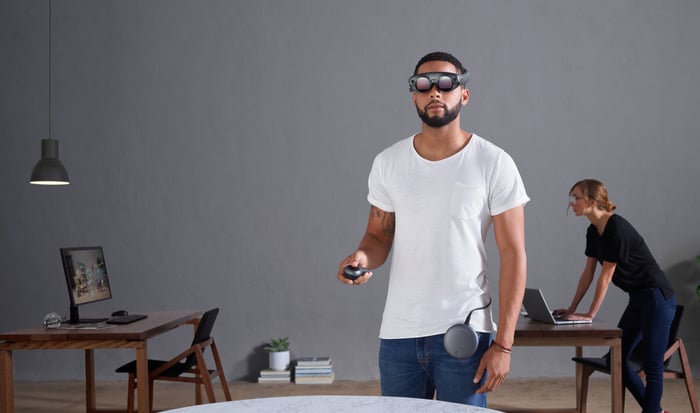 That partnership sounds like an exciting way for AT&T to diversify away from smartphones, but there have been several problems with Magic Leap in recent years. The start-up repeatedly used pre-rendered CGI videos to attract attention, which critics claim misled investors about the actual potential of its technology. A recent tech demo, which showed a crudely rendered golem tossing a rock, was a far cry from the photorealistic creatures featured in its promo videos.

Why do people say Magic Leap is overhyped?

Magic Leap has attracted many notable investors before, including Alphabet's Google and Alibaba. Yet Magic Leap's secrecy and its unimpressive tech demo indicate that the start-up was perhaps just good at marketing the idea of "fully immersive" augmented reality.

Many industry watchers have already taken off their rose-tinted glasses. Last October, The Verge said that Magic Leap's "reputation is nearly mythical" and noted that many of its patent applications were "generally far-fetched, sometimes terrifying, and only rarely practical." Last December, Gizmodo listed Magic Leap on its list of "10 Hyped Tech Companies" and warned that it "has to magically blow everybody's minds or else it'll be laughed out of the industry."

Microsoft will reportedly launch a second generation HoloLens next year. If it's cheaper than the current development version, which costs $3,000, it could render Magic Leap One obsolete.

Magic Leap claims that its technology, which projects images directly onto a user's retina, generates better quality images than other AR headsets. But if Magic Leap's technology were that revolutionary, bigger AR players like Microsoft would probably have tried to buy the company.

What does AT&T hope will happen?

When Apple launched the first iPhone in the US in 2007, it signed a five-year exclusivity agreement with AT&T -- much to the chagrin of many wireless customers. It might seem like AT&T is trying to lock in another hot consumer electronics device, but Magic Leap One doesn't look like the next iPhone.

Magic Leap isn't a household name, and the brand's modest Twitter follower count of 62,000 suggests that the Leap One will mostly appeal to tech enthusiasts instead of mainstream consumers. Magic Leap hasn't revealed the headset's price yet, but its use of NVIDIA's Tegra X2 CPU suggests that it will be a high-end gadget.

AT&T will likely use the Magic Leap One as a showcase device for its 5G technology, which it plans to launch in a dozen cities by the end of 2018, presenting a device that needs the speed of 5G. It could also be used to introduce its wireless plans for wearable devices -- like smartwatches and AR headsets -- which could diversify its wireless revenues away from the saturated smartphone market. But it's unlikely that consumers will line up around the block for the headset as they did for the iPhone.

AT&T seems to be jumping on the AR bandwagon with this investment in Magic Leap. Sales of the Magic Leap One will probably only account for tiny drops of its annual revenue, but the device gives the telco a foothold in the fledgling AR market -- at least until Microsoft launches a consumer version of HoloLens.

Why Did AT&T Invest in an Overhyped Augmented Reality Startup? @themotleyfool #stocks $T Next Article
Current