Japan's national legislature finally approved a law legalizing casino gambling in the country that will allow gambling in as many as three cities, which have yet to be chosen. With the authorization bill passed, the hard part now begins for the casino operators angling to get assigned one of the limited licenses.

Las Vegas Sands (NYSE:LVS), Melco Resorts & Entertainment (NASDAQ:MLCO), MGM Resorts (NYSE:MGM), and Wynn Resorts (NASDAQ:WYNN) are among the casinos that have expressed interest in being awarded a license. Several have expressed a willingness to spend upward of $10 billion to construct an integrated resort. 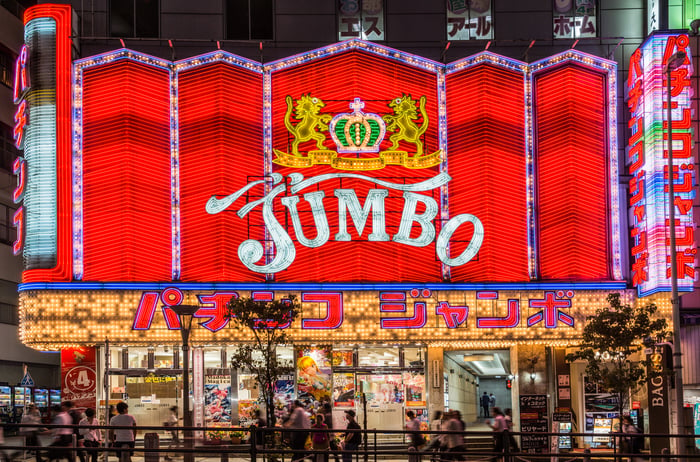 Gambling in Japan has been limited to specific events and locations like pachinko parlors, but casino gambling could be much bigger. Image source: Getty Images.

Japan is going to be a lucrative market for whichever companies win. Although analysts have scaled back earlier predictions of the country being a $40 billion opportunity, the $15 billion to $20 billion currently estimated would still make it the second-largest casino market behind China's Macau.

Also, because there will initially be one license issued in each city chosen, the winners will essentially have a monopoly on their local markets. And beyond gambling, constructing integrated resorts means the casino operators stand to make billions on other activities at their resorts, including hotels, conference rooms, and retail opportunities.

Casinos on the Las Vegas Strip generate about two-thirds of their revenue from non-gaming activities. Macau has been under an edict to increase the amount of revenue generated from activities other than gambling, and though it currently stands at around 12% of the total, many analysts don't expect it will ever reach Vegas levels.

Japan, though, could find itself closer to Las Vegas than Macau. Because the Chinese casino makeover happened after years of a focus on high-stakes gambling, operators have been shoehorning in activities to attract more of a mass audience into their new developments. Sands Venetian has a half-scale version of the Eiffel Tower, for instance, while Melco added a 4D Batman roller coaster and figure-eight Ferris wheel to Studio City.

Japan is starting out with integrated resorts and

the legalization of casino gambling isn't exactly popular in Japan because of the high rates of gambling addiction in the country (it's legal to gamble in Japan on certain activities, such as horse racing and in pachinko parlors, but, until now, not in casinos). So having a broader range of activities around the casinos is a smart move.

The Las Vegas experience is certainly one that's all about entertainment these days. MGM Resorts launched its "Welcome to the Show" marketing campaign last year with a nearly 3-minute video that highlighted how its 27 global locations weren't in the hotel business, but rather "in the holy sh*t business."

Cities such as Nagasaki, in southern Japan, and the more centrally located Osaka and Wakayama, are said to be leading in the consideration for having the casinos sited within their borders, while the Hokkaido prefecture in northern Japan is also in the running. The legislature is said to be looking to expand tourism and economic development beyond just Tokyo.

Site selection and choosing license holders are the next course of business, and industry executives are hopeful licenses will be issued by 2020.

There has been a lot of speculation as to which casino operator could win a license. As noted, Las Vegas Sands, Melco, and MGM have all said they would be willing to spend up to $10 billion on their resorts, but Melco has developed tracking technology that could find favor with regulators. In trying to minimize the addiction of gambling, they've enacted entrance fees for Japanese citizens and limited the number of visits citizens can make to a casino in a week and per month (tourists would not have to pay a fee or be restricted on visits).

Caesars Entertainment (NASDAQ:CZR) has said it really depends upon what cities are chosen as to what it would spend, but underscored it would do "whatever it takes to create a world-class, uniquely Japanese entertainment resort."

The success of the early licensees will likely determine whether casino gambling will expand beyond the first three resorts that are envisioned. But with a large number of players jockeying to be one of the first, it may make the legalization process look like the easy part. Now the hard work of lobbying begins for a license and building on the promise of creating world-class entertainment opportunities.