NAND chip prices are already plunging, and analysts are starting to see weakening demand for DRAM chips. After two years of soaring profits, memory-chip maker Micron Technology (NASDAQ:MU) may soon be facing its first downturn since 2016.

On the eve of potentially tougher conditions for the memory-chip industry, it's a good time to remind investors that Micron's rock-bottom price-to-earnings ratio isn't what it seems. Micron trades for just 4 times trailing-12-month earnings, a multiple that looks downright ludicrous on the surface. But that valuation reflects the hard truth that Micron's sky-high earnings simply aren't sustainable. 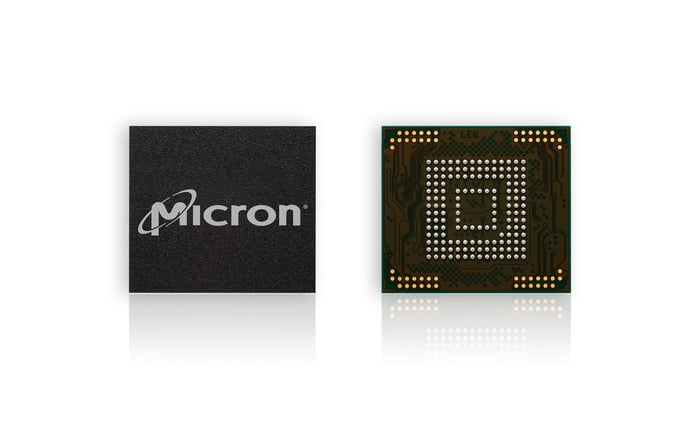 The memory-chip industry goes through booms and busts, like any capital-intensive commodity industry. Rising demand can boost chip prices and temporarily cause profits to soar, but those fat profits inevitably lead to greater supply and a bout of excessive optimism. Micron unveiled a massive $10 billion share-buyback plan in May, for example, a sign of extreme confidence that has no place near the top of the cycle.

Eventually, demand falls short of elevated expectations, and oversupply causes chip prices to plunge. Profits can drop, or even turn into losses, and pessimism becomes the order of the day. Weaker supply growth based on that pessimism enables demand to eventually catch up with supply, and a new cycle begins.

Each downturn is different. Some last longer and are more severe than others, and there's really no telling ahead of time exactly how Micron will fare, or even when the downturn will begin in earnest. But one thing is for sure: Valuing Micron based on its earnings near the peak of the cycle is a recipe for disaster.

Instead, taking a long-term average can help smooth things out and give a more realistic estimate of Micron's true earnings power. One way to average Micron's earnings is to calculate the company's return on invested capital for each year, then average that return and apply it to Micron today to come up with an average earnings number.

I've calculated Micron's return on invested capital for each year from 2008 through 2017, as well as for the trailing-12-month period, by taking net operating profit after taxes, and dividing by invested capital, which is shareholders equity plus any interest-bearing debt. There are different ways to calculate these figures, so take my numbers as somewhat rough estimates.

Here are the results: 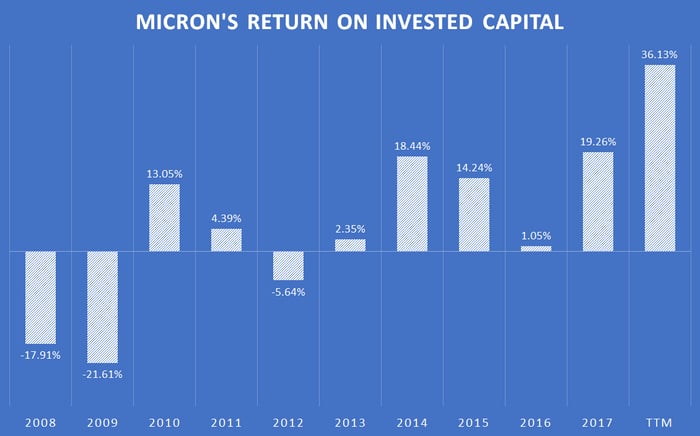 Micron is about as inconsistent as it gets. The company's average return on invested capital during this period is just 5.8%. If you exclude 2008 and 2009, which one could argue are outliers due to the financial crisis, that average return rises to 11.5%. I'll use both of these numbers to calculate a range.

Applying these average returns on invested capital to Micron today and adjusting for interest payments yields an average net income between $1.65 billion to $3.70 billion. Based on the current market capitalization of about $50.5 billion, Micron trades at a price-to-average-earnings ratio between 13.7 and 30.6. That's far from the low-single-digit multiple the stock sports based on current earnings.

Micron stock isn't ridiculously cheap if you consider its average earnings power over the past decade. You could argue that it's slightly undervalued if you ignore its worst years, or that it's quite a bit overvalued if you don't. My conclusion: Micron is not a bargain today, although a tumbling stock price could change that in the coming months.