Later this week, Apple (NASDAQ:AAPL) will begin taking orders for the iPhone XR, which is positioned as the most affordable of the trio of iPhones unveiled last month. The iPhone XR will then ship next Friday. With as strong as the iPhone XR looks -- it includes 3D facial recognition, the headline selling feature over the past year -- there is some cannibalization risk because iPhone XR starts at just $750, compared to $1,000 and higher for iPhone XS or XS Max.

Even if the iPhone XR offsets some of the upside in average selling prices (ASPs), it could help drive Apple to record iPhone units in the fourth quarter. 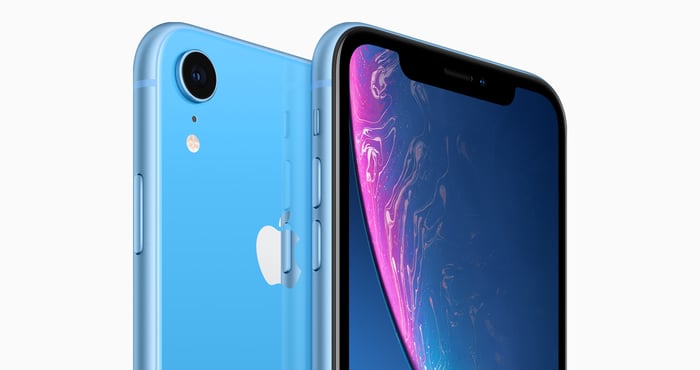 iPhone XR is expected to be a hit. Image source: Apple.

Widely followed Apple analyst Ming-Chi Kuo released a research note this week (via MacRumors and 9to5Mac), and he has boosted his estimates on total iPhone units in the fourth quarter. Kuo now expects the Mac maker to ship 78 million to 83 million iPhones, up from his prior estimate of 75 million to 80 million. The primary reason for the revision is expected strong demand for the iPhone XR compared to last year's iPhone 8, particularly in key markets like China, where dual-SIM support is important.

Kuo also increased his estimates for iPhone XR shipments in the fourth quarter, which he models at 36 million to 38 million, up from a previous forecast of 33 million to 35 million. Using the midpoints of Kuo's estimates, that could mean the iPhone XR ends up accounting for over 45% of the product mix. That would also mean setting a new quarterly record, as Apple's current record is 78.3 million units (Q4 2016).

iPhone units will then decline sequentially in the first quarter due to seasonal factors, but the iPhone XR's sequential drop is expected to be smaller than other models'. In other words, strong sales of the iPhone XR could help mitigate the seasonal hit that all consumer electronics companies face coming out of the holiday shopping season. With iPhone XR launching in late October, pent-up demand could potentially keep sales going for quite a while.

Keep an eye on ASPs

Demand for the iPhone XS seems lukewarm, considering the incremental differences with last year's iPhone X. The iPhone XS Max and iPhone XR will be the real volume drivers, which will have conflicting impacts on ASPs because iPhone XS Max starts at $1,100 compared to iPhone XR's $750. Apple never directly discloses unit mix beyond perhaps vaguely touting which model was the most popular, so investors will want to pay attention to ASPs to assess the product mix.